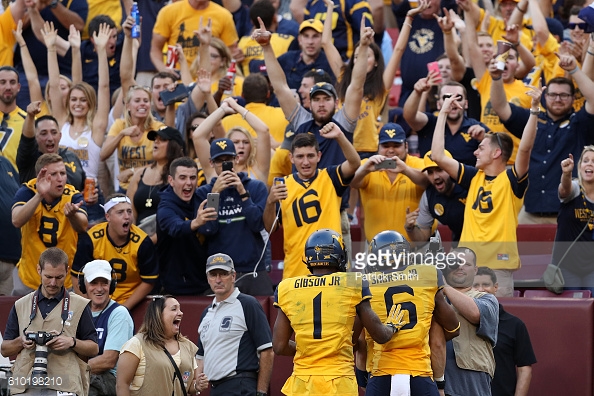 Landover, Maryland – Traveling long distances is expected in the Big 12 when you’re West Virginia, but playing a game at neighboring Maryland’s FedEx Field? Neutral-site games are no stranger to the Mountaineers, as they played in the Georgia Dome in 2014 versus Alabama. Coming from Provo, Utah though, Brigham Young University was playing for more than just a victory on the east coast.

Many have been talking about Big 12 expansion – including us – and BYU is right in the mix. With a three-game, Pac 12-heavy schedule to start the year (Arizona, Utah, and UCLA), the Cougars were 1-2, averaging only 17 points and 338.7 yards per game. How would the Mountaineers fare against this type of competition?

On the opening drive of the game, Skyler Howard orchestrated a perfect drive that saw the ‘Eers score three times; a back-shoulder pass to Gary Jennings that was negated by an offside penalty, a QB sneak that didn’t count due to an illegal formation, and finally, a Rushel Shell run up the middle for the first official score of the game. Those three plays showed me something I’ve yet to see from the Mountaineers this season; persistence. How many teams would’ve folded after their first score was taken off the board? Or after their second was removed because of a silly penalty? This drive was important for the Mountaineer’s versus BYU, but it will prove to help in the long run as well.

Skyler Howard completed 31 of 40 passes for 332 yards and one touchdown. He did throw a bad interception early on, but hooked up with 10 different receivers throughout the day.

The offensive line put forth a solid game, clearing holes for running backs and protecting Howard all game, allowing only one sack. WVU rushed for only 149 yards, but got a group effort from Justin Crawford, Shell, and Kennedy McKoy. Crawford had the best outing, piling up 86 yards on nine touches. His shiftiness brings a special dynamic to the Mountaineers offense they’ve lacked in recent memory.

Senior defensive end Noble Nwachukwu registered his first sack of the season. The big fella also had a pick on a BYU 2-point conversion attempt.

The WVU defense made some nice plays against the Cougars, but coordinator Tony Gibson won’t be happy with his group’s spotty performance. They gave up 146 rushing yards in the 1st half alone, and 280 total for the game. WVU also had a rough time getting off the field on 3rd down, allowing BYU to convert 10 of 15 attempts. There doesn’t appear to be a playmaker on the WVU defense quite yet, but Kyzir White and Maurice Fleming showed flashes of that potential Saturday.

Special teams were a problem for the Mountaineers at FedEx Field. They gave up multiple kick returns that afforded BYU great starting field position. Shelton Gibson had a few big kick returns for WVU, but that unit also has some kinks to work out – and for starters, eliminating the penalties.

Jovon Durante, the speedy sophomore receiver, showed out in a big way versus BYU, hauling in six passes for 32 yards in the 1st half. A meager 5.3 yards per catch, but this opened things up for other guys. He did not record a catch in the 2nd.

Several players in the ‘Eers secondary contributed in key moments. Antonio Crawford, Maurice Fleming, Kyzir White, and Rasul Douglas all garnered routine snaps for Gibson, while Khairi Sharif took advantage of his opportunities, recovering a fumble in the 3rd quarter.

Freshman running back Kennedy McKoy played a handful of snaps, getting a few carries and also some catches, but his most memorable play came on a simple swing pass. McKoy caught it, then turned upfield and sought out contact with a BYU defender. The subsequent “oooh’s” and “ahhh’s” came after the notorious speedster plowed through the Cougar in his path, earning high-five’s from teammates.

Plays of the Game

On 3rd and goal from inside the 10, BYU attempted a stop route on WVU defensive back Antonio Crawford. Crawford made an excellent break on the ball, almost coming away with a pick, stalling the Cougars drive and forcing a field goal attempt. The BYU kick was good, making the score 10-7, BYU.

Rushel Shell had a good game, particularly in the redzone. He turned an early 3rd down check-down pass into a first down, and then on the next play punched it in for his second rushing score of the 1st half.

Late in the 2nd quarter, WVU linebacker Justin Arndt forced BYU QB Taysom Hill into a hurried pass, when a swooping Rasul Douglas came in from the Mountaineers’ secondary to pick it off and return the interception for a touchdown. This put WVU up 21-10.

On 4th and 1 midway through the 3rd quarter, WVU Head Coach Dana Holgorsen decided to run a QB power with Skyler Howard for the first down. This was a bad play for two reasons; the first being that the quarterback wasn’t taking the snap from under center, the second being that Holgorsen has a plethora of weapons to hand/throw it to; Rushel Shell, Justin Crawford, Elijah Wellman, Shelton Gibson, Ka’Raun White – you get the idea. This gave BYU possession near midfield, trailing WVU 21-19.

In the 2nd half, Shelton Gibson finally got loose on a deep pattern and hauled in Howard’s 51-yard pass. The ‘Eers would score moments later, when Howard’s pocket broke down and he scrambled in. 28-19, WVU.

With 4 minutes to go in the 4th, safety Jeremy Tyler intercepted a tipped pass on 1st down that gave the ‘Eers the chance to seal the game. 35-32, WVU.

After a run that put WVU inside the 10 yard line, center Tyler Orlosky inadvertently snapped the ball when QB Howard wasn’t ready, resulting in BYU recovering the fumbled snap. Cougar ball, down 35-32. 4:15 to go.

On the final BYU drive, Maurice Fleming intercepted a pass on the 2-yard line, ending the Cougars comeback attempt. 35-32, WVU.

The Mountaineers play host to Kansas State in Morgantown on Saturday, October 1, for their first Big 12 conference game.

Anybody looking to jump on the WVU bandwagon better hurry up and get a seat; this team’s about to start rolling!