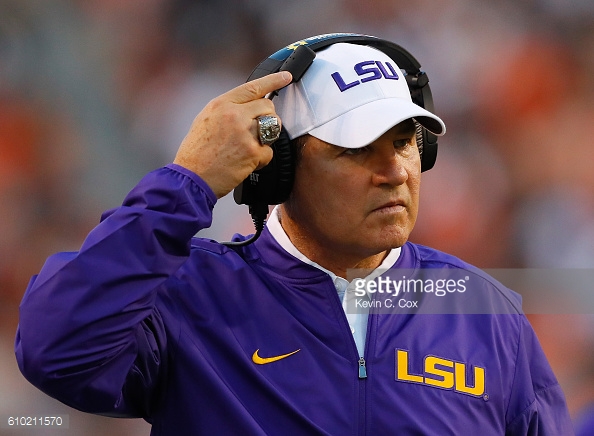 Shoot for the stars, right? That’s what we were always told growing up. Well, now it’s happening … but with adults … in Manhattan, Kansas.

There have been rumblings around Manhattan over the past 48 hours that the Wildcats might have a shot to land Les Miles as the successor to Bill Snyder as head football coach.

The appeal is obvious. Miles, who was fired on Saturday by LSU, finished with his tenure with the Tigers at 114-34, including a National Championship in 2007. But, since 2013, LSU is 15-11 in conference play, which was just not good enough for the Mad Hatter to keep his job in a pressure cooker such as Baton Rouge. Despite some recent struggles in the grueling SEC West, Miles hasn’t had a losing season since his first year at Oklahoma State in 2001.

Of course Miles would be a home-run hire in Manhattan. His style of football is all about the ground-and-pound, strong offensive and defensive lines, and scoring enough to win. It’s not all that different from what Snyder has built. He’s kept a lot of the corn-fed boys that are produced in Kansas and the upper Midwest in the state, while getting most of his skill-position players from the JUCO route and finding diamonds-in-the-rough further south in Texas and Oklahoma. If Miles could combine keeping the offensive line studs in-state, while getting even better skill position players via his recruiting ties over 10+ years at LSU, he would be an immediate contender.

But, now the bad news…

In casual conversations I had with a few folks around Manhattan, the general consensus was that this is nothing more than fans’ wishful thinking, rather than any kind of legitimate possibility.

The reality is current head coach Bill Snyder can’t do this forever… or can he? Snyder turns 77 years old next week. Despite wishes from some folks within the Kansas State administration that Snyder retire, so the program can find its next head coach, it does not appear like he is going anywhere, or wants to go anywhere. I give Synder credit for having fantastic stamina and energy for his age. But, also, no matter how much a coach helps build a program, the program and university should not be beholden to the demands or wishes of a ball coach. That creates very sticky situations for all parties involved and never ends well (see: Paterno, Joe and Bowden, Bobby).

Another reality in Manhattan is that there is a disconnect on who should succeed Snyder. He wants his son, Sean Snyder, who is currently the special teams coordinator for the Wildcats. But, many involved with the program have no interest in seeing Sean Snyder take over, especially since he has never been a head coach. Admittedly, the pressure coming from Bill does have a dirty feel of nepotism.

So, what if Bill Snyder just stays? He stays until Kansas State decides to fire him or not renew his contract, which runs out after the 2017 season. Boy, that would create an awkward and uncomfortable situation for the powers-that-be in Manhattan. Bill Snyder, who may come across like your nice grandfatherly neighbor, clearly still has an edge to him. He could be banking on the fact that many at Kansas State don’t have the stones to deal with a Snyder forced-retirement situation.

So, while Les Miles would be a fantastic fit in Manhattan, there’s such a minuscule chance it actually ever happens. That is, unless Bill Snyder changes his tune. Then, maybe, just maybe… there’s a chance. Otherwise, the only Big 12 schools that Miles could end up at are Baylor and Texas, while keeping in mind places like Penn State, USC and Houston.

Sorry, Cats fans … the Purple Wizard has certainly been a blessing for the university, but he soon may end up being a curse.