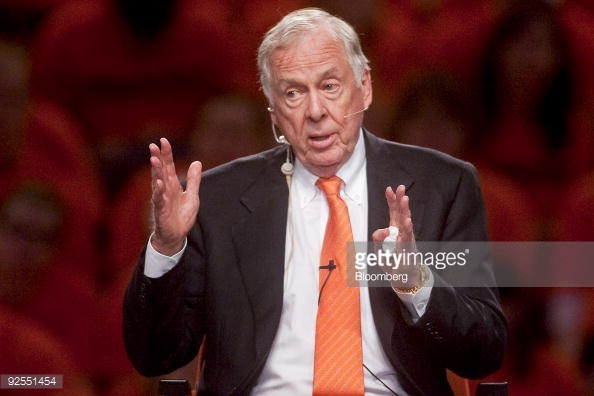 It’s time for Boone Pickens to be quiet.

Don’t get me wrong, OSU fans should be very thankful for Uncle Boone.  Without the millions, actually HUNDREDS OF MILLIONS, of dollars that he’s donated, Cowboy Football wouldn’t be what it is today.

But he needs to relax on his stance about OSU football and the Big 12, or at least keep quiet about it.  His comments about Mike Gundy and OU President David Boren were nothing short of asinine, and it’s not the first time he’s stirred the pot in Stillwater with his words.

Let’s discuss his Gundy comments first, shall we?

Mr. Pickens stated “I don’t have any conversations with Gundy,” and when asked if there were problems between the two, he added, “I don’t know, but Mike doesn’t handle people relationships very well. And he gets mad about things. I’ve heard he’s written some notes about me that weren’t very complimentary.”

First of all, I think making snarky remarks to the media about another person isn’t handling relationships very well either, Boone.  Maybe that’s just my opinion though.

Being a billionaire probably gets you used to having things your way all the time, but that doesn’t mean other people always have to play along with your imagined privileges, Boone.  Mike Gundy doesn’t have to clear time in his schedule to talk to you, nor does he have to like you.  College football coaches are insanely busy people, especially during football season, it wouldn’t be a shock if he’s working 16 hours a day.  Add in the fact that he has a wife and kids and, at best, you’re third on his list of priorities.

Coach Gundy is also a multi-millionaire in his right, so he doesn’t need to kiss your ass like most people probably do.  He doesn’t need a piece of your pie.  He could stop coaching tomorrow and live in retirement on his gorgeous ranch (Google his house, it looks like a Bass Pro Shop) and be more than comfortable the rest of his life.

And if you do decide the grass is greener with another coach, and bully Oklahoma State into making a change with your checkbook (we’ll discuss the insane Les Miles rumors in a minute), Gundy would have another job next year, if he wanted.  There’s a reason he gets rumored as a candidate for job openings every year.  He’s a good coach, and he does things the right way.  A lot of schools would be very happy to have Mike Gundy at the helm!

Pickens’ comments about David Boren might not be as childish as the ones about Gundy (he writes mean notes about me!) but they are just as thoughtless. “I’ve known David forever. He likes to talk. He gets a little bit confused sometimes,” Pickens said in response to a rumor that OU was changing its mind on expansion.  He also suggested that maybe it’s time for Boren to retire.

Here’s the deal, OSU fans: you need Boren.  I’ve written about this before and it’s still true.  The Big 12 is probably done.  Texas doesn’t care what happens to the conference, maybe OU does, but they are the only two schools with the pull to keep it together. That being said, they need to work in tandem.  What are the odds of that happening?  Even if expansion happens it’s just a band aid. The end is near!

This is why folks in Stillwater don’t need Boone pissing Boren off.  Boren loves Oklahoma, not just the school, but the state.  He makes decisions he feels are best for the STATE of Oklahoma, and keeping the Sooners and Cowboys together if there is conference realignment has been something he’s said he’d work to make happen.  If (when) the Big 12 explodes every conference is going to want the Sooners and they’d be willing to take the Pokes alongside as a plus one to get them.  OSU might do fine on its own, the Pac 12 or the ACC might come calling, but there’s also a solid chance they get left out if the 16-team super conferences never come to be.  No, it’s much better for Stillwater and Norman to be friendly.  While Mr. Pickens’ wealth, stature, and political power could help in realignment, there’s another side to that coin, and it would be a shame if Oklahoma State doesn’t get invited to the party because Crazy Uncle Boone makes everyone uncomfortable.

After the news came out about Miles’ firing at LSU and then Boone’s comments, there has been way too much chatter from OSU fans about bringing Miles back to coach the Cowboys.  The general theme of the conspiracy theory is now that Miles will need work next year Pickens want to run Gundy off so Les can replace him.

I like Les Miles.  I liked him when he was Oklahoma State’s coach.  I like his crazy personality, his zany quotes, I even like his maddening game management.  He makes college football more fun just by being involved in it!

But OSU is far better off with Gundy than it would be with Miles.

Mike Gundy IS Oklahoma State football.  He’s been the star quarterback, the hot shot assistant coach, and now he’s the man in charge.  He’s been a part of OSU football longer than most of the fans, who are saying it’s time for him to go, have been alive.  You see, that’s the thing: it tends to be the younger generation of Cowboy fans who are frustrated with Gundy.

“Are we really just going to be content with winning 9 or 10 games a year?!”

It wasn’t that long ago that OSU didn’t win at all.  I remember the days of being super excited because the Cowboys made a bowl game.  Thanks to Gundy OSU is competitive in every game it plays.  There are only a handful of teams in the country that are dominant all the time, and thanks to the increasing parity in college sports that number is shrinking. When you think of teams you expect to win every game, who comes to mind? Bama? Of course, Nick Saban may be the best football coach ever.  Ohio State? Sure, everyone is surprised when they lose a game.  Can you think of another team that year in and year out is expected to win every game, not just by its fan based but by EVERYONE?

OU used to be one, but they are more likely to go 10-2 every year than 12-0 these days. They’ll have to be extremely lucky to hit 10 wins this year. The USC Trojans are a shell of their former selves.  Oregon was dominant for a while, but couldn’t sustain it.  Michigan is trying to come back to being that team.

No, being a team that competes for national championships every year just isn’t in OSU’s future, and running off the best coach they’ve ever had because that’s what you want to be is absurd.  OSU is a program capable of sustaining eight to ten win seasons, with occasional spikes upwards and slumps downwards.  That is just who they are, and honestly who most teams are these days.

If the insane happens and they bring back Les Miles, they’ll win.  He can coach and he can recruit. He’d come in, hire a hotshot offensive coordinator (offensives woes are what got him fired from LSU), he’ll have three or four good years proving he’s still got it, then he’ll be gone to which ever big name job wants him.

The younger fans don’t know the days before Gundy.  The days of Jimmy Johnson and Les Miles, the days of having a great coach come in and win just to break the program’s heart. Kids, imagine the feeling you had when Dana Holgorsen or Todd Monken left, but multiply it by a million.  The University of Houston fans will be able to explain this feeling to you very soon.

Gundy is closing in on 100 wins at OSU, the most by any coach in the program’s history by almost 40 wins.  He coached the team to the only Big 12 Championship in school history in 2011, and was a missed field goal away from playing for a National Championship that same year.  Gundy-coached teams have played in the school’s only BCS bowl, two Cotton Bowls and a Sugar Bowl.  They have played in the game that decided the Big 12 Champion four of the last six years.  In the time he’s been head coach Oklahoma State has won more games than Notre Dame, Michigan, Texas A&M, Arkansas, Tennessee, Stanford, Miami, UCLA and Auburn.  All of those are big name programs.  His resumé is impressive.

But the most impressive stat from Gundy is 12 years coached.  Any other coach with his prowess leaves Stillwater years ago.  This dude bleeds orange, and him leaving OSU would be devastating.

Boone Pickens needs to get on board.  So do the younger fans.  Everyone needs to understand what they have and appreciate it, because whether it’s retirement of leaving for another school out of frustration, Mike Gundy won’t be around forever.

Is Donald Trump an Oklahoma State fan?
No Mahomes, no problem for Texas Tech, beats Kansas 55-19
To Top