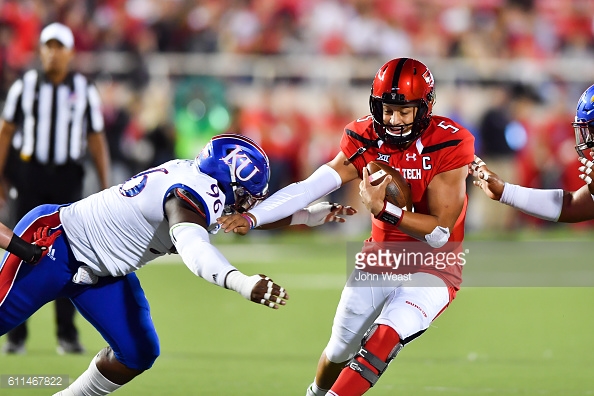 At the time, the Red Raiders were only leading the lowly Kansas Jayhawks 28-19 in the 3rd quarter at home. Then, the team’s leader, Patrick Mahomes went down with a right shoulder injury. Mahomes was tackled on his throwing shoulder after a 32 yard run. Following one throw on the sideline, the QB went back to the locker room with the training staff.

But, enter junior QB Nic Shimonek. He capped off his first drive with a touchdown and the Red Raiders never looked back in a 55-19 route of the Jayhawks.

Shimonek almost made Tech fans forget about their Heisman-contending QB by going 15/21 for 271 yards and four touchdowns to zero interceptions. Prior to his injury, Mahomes was having his usual big night, finishing 27/34, with 277 yards and 4 touchdowns to 1 interception.

The Red Raiders jumped out to a 14-0 lead in the 1st quarter, scoring touchdowns on their first two drives. The opening drive was just 5 plays for 75 yards, capped off with a Mahomes 14-yard touchdown pass to Jonathan Giles. It was the start of a huge night for Giles who caught 12 passes for 219 yards. Texas Tech forced Kansas into a 3-and-out and then put together an 8-play, 73-yard drive that ended with Mahomes hooking up with Cameron Baston for an 18-yard touchdown pass.

Behind Mahomes and Shimonek, Texas Tech has now scored at least 50 points in each of its last 9 games at Jones AT&T Stadium.

The Jayhawks offense struggled mightily at the start of the game, punting on their first six drives, the first four of which had Montell Cozart at QB. Ryan Willis got the snaps starting on the fifth drive and led Kansas to a touchdown on his 3rd drive of the game, hooking up with Chase Harrell for an 18-yard touchdown.

Willis appeared to earn the starting QB job for the Jayhawks, as he took the majority of the snaps in the second half. Willis finished 14/26 for 142 yards with 1 touchdown. Cozart wrapped up his night 9/20 for 97 yards with a touchdown and an interception.

The Jayhawks defense played much better than the box score would indicate: 55 points, 548 passing yards, 8 passing touchdowns. But, Tech was unable to run the ball (73 total rushing yards), and Mahomes spend a lot of the night running around the backfield. The KU defense racked up 3 sacks and had 10 tackles for loss, but its lack of depth wore them down, especially late in the 2nd half.

Texas Tech is now 17-1 all-time against Kansas, while the Jayhawks losing streak away from Memorial Stadium has hit 40 games. The Red Raiders improved to 18-18 on Thursday night games (their last one came in 2013, TTU beat TCU 20-10).

The Red Raiders are now 3-1 and have some extra time off before playing in Manhattan against Kansas State next Saturday. Meanwhile, the Jayhawks fall to 1-3 and host TCU next Saturday.

Big 12 college football picks against the spread: Week 5
Time for Kansas to hand QB job to Ryan Willis, for good
To Top