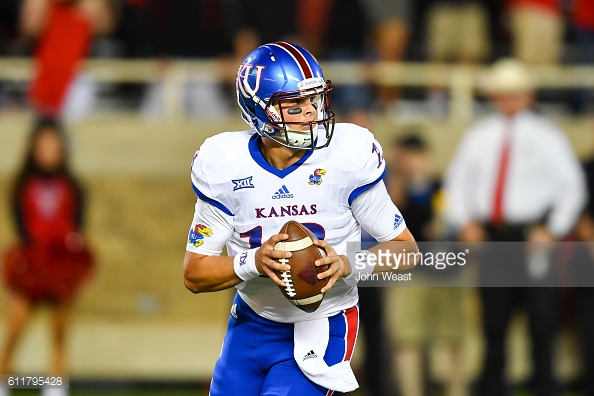 The Kansas Jayhawks lost on Thursday night 55-19 to Texas Tech, extending their road losing streak to 40 games. Yes, 40 games. The last time Kansas won a football game away from Lawrence was September 12th 2009 against UTEP. The last time Kansas won a Big 12 game away from Lawrence, President Obama had not yet been inaugurated. #MakeKansasGreatAgain

Head coach David Beaty is doing his best to try and turn around KU into a respectable program. Based on the college football landscape, I find it nearly impossible to believe the Jayhawks can be what they once were under Mark Mangino. There is no more Big 12 North to help ease the schedule, and with conference realignment, the state of Texas, even the less heralded recruits, are finding many options outside of the Big 12. But, I do believe Kansas can become a bowl team year-in,  year-out.

But, ever since Todd Reesing, Kansas has not had an answer at quarterback. There has been hope surrounding guys like Jordan Webb, Michael Cummings, Jake Heaps, and Dayne Crist. None of them really panned out as expected.

This season the job has been split by senior Montell Cozart and sophomore Ryan Willis.

Based on what we saw Thursday night against Texas Tech, I don’t see why coach Beaty would go back to Cozart at this point. I respect the hell out of Montell Cozart. He has been a loyal soldier to this program for years, through some very tough times. But, this program needs to start preparing for the future. It is still, at best, a year or two away from respectability. Montell Cozart won’t be here then. Plus, he’s not good enough to warrant putting the future on hold.

Cozart isn’t the difference between 2 or 3 wins this season. Plus, even if he was, who cares? KU winning 1 game or 2 games this year doesn’t makes a difference in the projection or growth of the program.

On Thursday night, there were too many easy passes that Cozart was way off on. Even screen passes in the flat, he was throwing the ball 1-2 yards behind the receiver. Granted Cozart is a better runner than Willis, but Beaty (who is now calling the plays) is not utilizing that strength of Cozart’s enough. The senior QB only has 11 carries this season for 38 yards. If Montell Cozart is under center, there has to be the threat that he is going to run the ball, but there hasn’t been enough of that.

If the offense is going to be a pocket-passing, spread, up-tempo offense, then just hand the keys to Ryan Willis. See what kind of growth he can make in his sophomore campaign. Then, by the time he is a junior or senior, and this team hopefully has more talent and depth, he has the chance to lead them to a 3-6 win season. Hell, let’s even see what Carter Stanley has! The red shirt freshman got some run against Texas Tech, and I believe Kansas fans would be happy to see more of him.

But, stunting Willis’ growth to give Cozart more playing time, when there is no obvious benefit to having Cozart under center, is short sighted for the entire Kansas football program. It’s still a long road ahead to turn around Kansas football, and every snap Montell Cozart takes, it one less opportunity for this team to prepare for next season.

As the old Brooklyn Dodgers fans’ saying goes, “wait ’til next year!”… that’s what the Jayhawks need to continue to live by, until further notice.