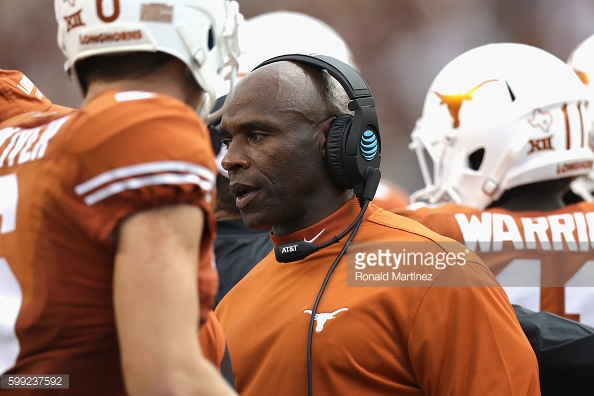 It wasn’t a pretty afternoon for the Texas Longhorns, who lost to Oklahoma State 49-31 in Stillwater. Texas fell to 2-2 on the season, and after the game Texas AD Mike Perrin told Anwar Richardson of Orangebloods:

I grabbed Texas AD Mike Perrin and asked about Charlie Strong’s future. He told me “We need to evaluate what happened here.”

Ran into Perrin, too, asked him about this: “I’m not evaluating Charlie per se. I’m evaluating everything.” https://t.co/t6sDo8uheI

This comes on the heels of head coach Charlie Strong saying he is going to help defense coordinator Vance Bedford with some play calling.

It seems crazy to me that Texas would really make a move on Strong before the season ends, but, it is Texas. Strong has already been on the record saying he doesn’t believing firing Bedford would fix any issues. He’s probably right about that. But, still…

Boy, doesn’t that win over Notre Dame feel like a lifetime ago? That’s life on the 40 acres.