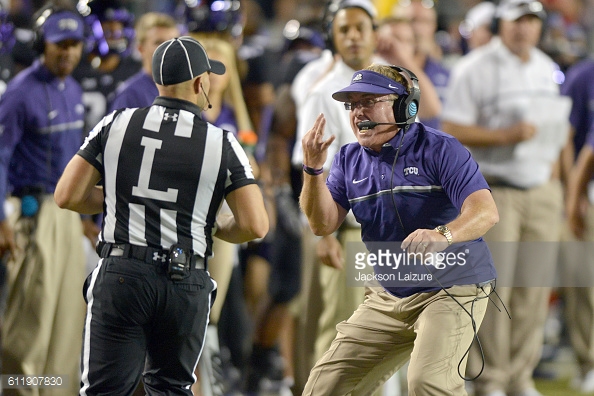 There’s no shortage of bad blood between Gary Patterson and Oklahoma QB Baker Mayfield (and his father). And, there was more fuel added to that fire after TCU lost to Oklahoma 52-46 on Saturday.

After the game, Patterson ripped the officials, and in the same breath, called out Mayfield, who claimed in an ESPN magazine feature in August that TCU prevented him from receiving scholarships from other schools.

First, Patterson commented on the officiating, specifically the end of the game intentional grounding call against TCU QB Kenny Hill, saying, “The bottom line to it is, in his [the official who threw the flag] estimation, [Hill] didn’t have anyone to throw to. Mine was he got hit, so I don’t know how he can tell he couldn’t throw it to him.”

As for his apparent dig at Mayfield, Patterson added, “You know, it’s amazing, we can’t say anything, but they can do whatever they want to. So I don’t really care right now if the commissioner, if they don’t like what I think about what happened with the officials.”

“We talk about sportsmanship in this game, and I’ve got a quarterback that writes a whole article on me, how I treated him wrong. But I can’t talk about officials. Bottom line to it is, I wasn’t happy with the officiating.”

Mayfield was recruited by TCU out of high school but ultimately did not receive a scholarship offer. The QB told reporters in December that TCU “kinda hung me out to dry right before signing day.”

Patterson denied that to be the case, and at the time responded by saying, “If people knew the whole story, they might not have a great opinion of Baker or his father.” Ouch.

The saga didn’t end there. Mayfield’s parents also admitted their stole offensive signs from the Horned Frogs during a game in 2014. Mayfield was familiar with the TCU co-offensive coordinator Sonny Cumbie, who did not change his signs from when he and Mayfield were together at Texas Tech prior to his transfer to Oklahoma.