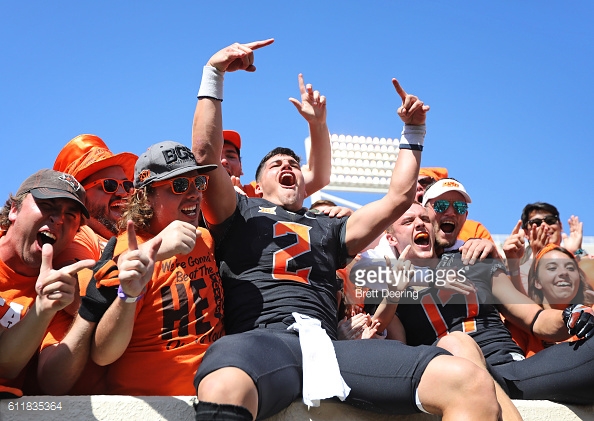 The Oklahoma State Cowboys got a much needed win Saturday over Texas 49-31. With all the distractions coming by way of massive donor T. Boone Pickens and his comments about coach Mike Gundy during the week the Pokes put together their best overall performance of the year on Saturday.

Pickens did release a statement before kickoff Saturday morning saying that he and Gundy were united in wanting what’s best for the school. But, let’s be honest, who knows how hard AD Mike Holder had to beg for that. Either way, it was too late. The comments were made and they left people wondering how secure Mike Gundy’s job was in Stillwater.

Instead, after the win for the Pokes, it’s Texas Coach Charlie Strong who appears to be on the hot seat. The win for the Cowboys silences the concerns about Gundy’s status, at least for the time being, and keeps them alive in the Big 12 championship race.

The Pokes offense was terrific on Saturday, as Mason Rudolph led the offense passing for 392 yards, three scores and posting a 93.3 QBR. However, it’s the Pokes rushing attack that has to have the folks in Stillwater most excited.

Oklahoma State rushed for 163 yards on 43 carries, which is an average of less than four yards per carry. Overall, not great, but, when considering how bad the OSU run game has been, those numbers don’t look half bad. At least now the Cowboys are a threat to run the ball, which should help alleviate some of the pressure off of the Pokes passing game, and keep defenses honest.

For example, the Pokes this week rushed the ball 15 more times than they dropped back to pass. Rudolph threw just 28 times and averaged 14 yards per pass. Just based on those numbers, it’s hard to argue with the theory that the rushing game has definitely helped the passing game.

Another bonus for the Cowboys this week was that they took care of the ball. There were no turnovers following the performance last week at Baylor where they gave it up four times.

Now, the not so good news: the Oklahoma State defense still leaves a lot to be desired. But, they did get key stops when they needed them this week. Still, the Pokes have to get better against the run if they are going to be a serious contender in the Big 12.

The Longhorns gashed them for 329 yards on the ground this week. Good luck beating the Sooners on December 3rd giving up those types of numbers against the run.

This was a great performance for Oklahoma State to have before it plays Iowa State, followed by a bye, and then Kansas (essentially a bye?). Following a painful September that included two “tough-to-swallow” losses, this game was a confidence booster that should launch them into the rest of the Big 12 schedule.

If the Cowboys defense can improve against Iowa State and during the bye, they have a great chance to compete for a Big 12 championship in a league that is anything but a certainty. Nobody can convince me there is an obvious favorite is in this league. All of these teams have shown to be flawed. Schedules could play a big role in who wins the league.

Another positive for Oklahoma State is that they have already played two of the tougher opponents in the league. As briefly mentioned above, Oklahoma State now enters the softer part of their schedule with Iowa State, Kansas, West Virginia, K-State and Texas Tech coming up. 4-1 is not out of the question, and should be expected from the Cowboys.  However, the schedule isn’t favorable to close out the season.

The Pokes end the season at TCU and at Oklahoma. Gundy has struggled mightily against the Sooners, going just 2-9. One positive way to look at it is the Cowboys have time to improve before they play those games.

So how much will Oklahoma State improve between now and November 19? We’ll have to wait and see.