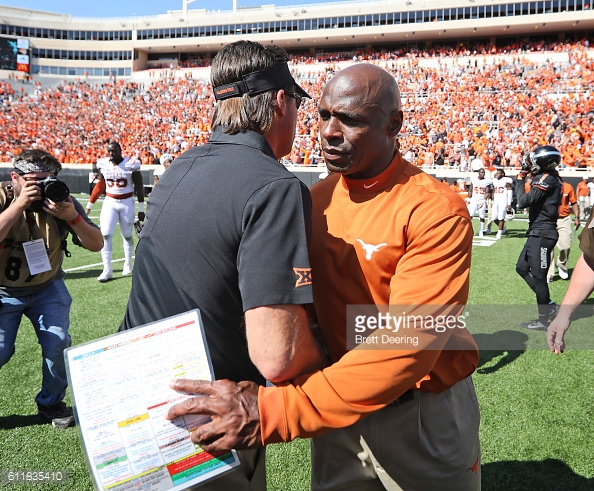 Well, when you start the season with a Top 10 win, then drop your last two games when allowing a combined 99 points, there’s expected to be turmoil. That’s especially the case when you’re the Texas Longhorns.

Sports Illustrated’s Pete Thamel reported late Sunday night that he spoke to a high-ranking Texas official, who said head coach Charlie Strong is “very close” to losing his job at the end of the season.

Thamel’s report did insist that no move would come during the season, mostly because there is no obvious replacement on the staff to take over. While the “powers that be” in Austin are reportedly happy with how Strong has recruited and changed the culture, they are not happy with the results: 13-16 as Strong is well into his third season on the job.

Also on Sunday, reports came down that Strong would be moving into play-calling duties on defense.

Multiple sources have told Orangebloods tonight that Charlie Strong will take over full control and play-calling duties from Vance Bedford.

Fans and boosters might like this move, but it really won’t change the results much. The Longhorns CAN’T tackle! How does changing the play caller fix that problem? Please, someone enlighten me on this.

The offense has drastically improved under new OC Sterlin Gilbert, but remember, it’s still being operated by a true freshman in Shane Buechele, who is only going to get better. The secondary has been terrible, but is loaded with young faces who are high-end recruits and will get better.

Once again, short sightedness and impatience may be getting the best of the folks on the 40 Acres.