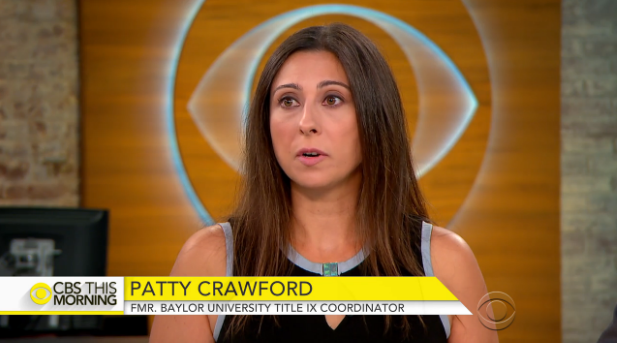 One day after resigning her post as Baylor University’s Title IX coordinator, Patty Crawford took her message to the nation on Wednesday morning.

Crawford says the school retaliated against her concerning the handling of several high-profile sexual assault cases.

Crawford appeared on “CBS This Morning” on Wednesday with her attorney, citing disappointment “in her role in implementing the recommendations that resulted” after an independent investigation suggested changes in how Baylor probed such cases.

For more than a year, Baylor has been accused of inappropriate handling of sexual assault allegations committed by its students. Just this week, two more women, who say they were sexually assaulted while attending Baylor, joined six others in a lawsuit against the school. Jasmin Hernandez sued the university back in March. She was raped by Tevin Elliott, a Baylor football player now serving a 20-year sentence.

“I continued to work hard and the harder I worked, the more resistance I received from senior leadership. That became clear that that was not something the university wanted and in July, I made it clear and ready that I had concerns and that the university was violating Title IX and my environment got worse,” Crawford told “CBS This Morning” Wednesday.

But, when interviewers brought up Baylor’s statement (move to 6:30 mark), alleging Crawford wanted $1 million, while retaining book and movie rights, her attorney quickly jumped in saying, “There was a mediation, and Texas law is quite clear that you cannot comment on what took place at the mediation… in a desperate attempt to smear Patty, what they’ve done is violate Texas law. Believe me, there is nothing I’d rather tell you than what went on in that mediation, because it’s in favor of Patty, but we choose to follow the law, unlike Baylor University.”

Here is the interview with Crawford in its entirety.