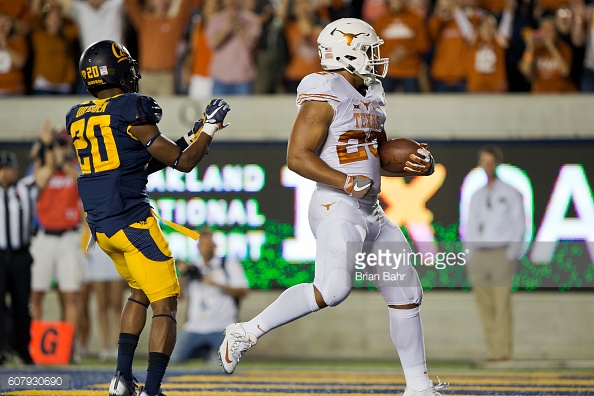 When it rains, it pours, and that’s exactly what is going on in Austin right now. There’s the two straight losses allowing nearly 100 points, Charlie Strong’s job status being questioned, and the Oklahoma Sooners looming. Well, now there’s the injury bug.

According to Alex Dunlap of Orangebloods, sophomore running back Chris Warren is expected to miss a significant amount of time.

If Warren actually misses eight weeks, the only game he would have a chance to be back for is the season finale in Austin against the TCU Horned Frogs.

Warren was half of the monster RB duo in Austin with D’Onta Foreman. At 6’2, 252-pounds, Warren had 62 carries for 362 yards and three touchdowns so far this season. The knee injury was suffered against the Oklahoma State Cowboys last weekend and he ended up missing the second half.

So, enter freshman Kyle Porter. He only has 15 carries for 62 yards so far this season, and isn’t the same physical presence as Warren, listed at just 5’9” and 208 pounds. But, Porter was a US Army All-American and can hopefully be the lightning to Foreman’s thunder.

FS1’s Joel Klatt: Texas ‘is the best job in America’
Big 12 Game of the Week preview: #20 Oklahoma vs. Texas
To Top