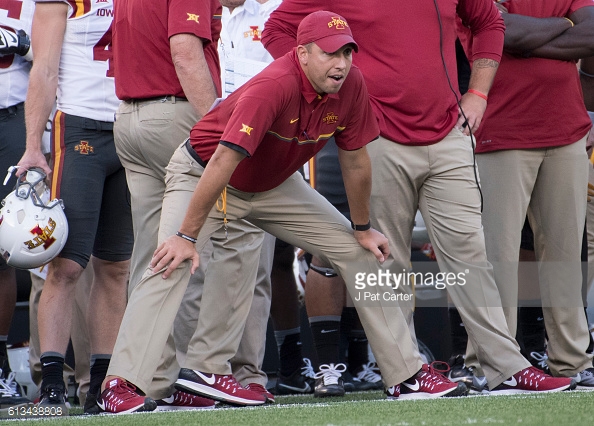 Where have you gone Mike Warren?

After blowing a 17-point lead on the road against Oklahoma State, Iowa State head coach Matt Campbell said, “the reality of it is, there’s a couple plays you’d love to have back, and we got to make them.”

I wonder if there were a couple of calls that Campbell and offensive coordinator Tom Manning would like to have back?

After rushing seven times for 42 yards as Iowa State lead 17-14 at halftime, Warren had just two carries in the second half for 8 yards. In fact, once of the Cyclones went up 31-14 in the 3rd quarter, their drives from there on out went as such:

So, from the time Iowa State went up by 17 points, Mike Warren never touched the ball. That makes no sense. You’re up big, trying to pull off the upset on the road, and your best offensive weapon who can chew up the clock doesn’t get to run the ball.

Mike Warren should be getting fed the ball when the Cyclones find themselves up double digits as an underdog in the final quarter of action.

That was 9 drives over the past two games down the stretch and Mike Warren got one carry. It’s unacceptable.

Coach Campbell added after the game, “I think a lot of it had to do with execution. I mean, got to make a play. We got guys open, and I think the play calls are in good situations. It’s just, got to execute when the ball is in your hand. Got to make the catch. Whether it’s a better throw or whatever it is. We had a couple third down plays where, shoot, the guy’s wide open and [we didn’t make the play].”

Sure, there have been too many dropped balls for the Cyclones this season. There’s no question about that. But, that doesn’t change what the play calls were down the stretch for the Cyclones. Third and long, maybe the Cyclones staff doesn’t trust some of its wide receivers. Well, run the ball with your preseason All-Big 12 running back. He may not pick up the first down, but, he’ll burn 40 seconds of clock, which when you have the lead is fine.

When asked about his running backs, Warren and freshman David Montgomery, Campbell said, “David played really well at times, and so did Michael. To me, it’s not going one over the other. We believe in both of those guys. We’re fortunate to have two guys like that.”

Well, if coach Campbell is so fortunate to have “two guys like that”, it’s time to start using them more, especially when it matters most.