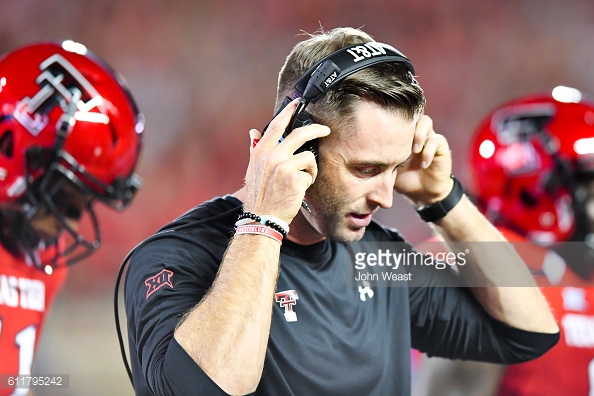 When it comes to Big 12 coaches on the hot seat, maybe everyone is talking about the wrong guy.

For the past couple of weeks, Charlie Strong has been the coach in the Big 12 most in danger of losing his job. Much of that is because of unrealistic expectations in Austin. The Longhorns are 2-3, and their win over Notre Dame doesn’t look as good as it did 5 weeks ago. But, Strong has still done an excellent job on the recruiting trail the past couple of years, has up to 8 sophomores starting on a defense that will improve, and finally found his quarterback in true freshman Shane Buechele. There’s reasons to believe that the future is bright in Austin. If Strong falters next year, then I agree, he should be out. But, I would give him through the 2017 season (barring some awful collapse the rest of the way).

But, what about Texas Tech’s Kliff Kingsbury? He’s in his fourth year running the program, and the reason for optimism is limited, at best. The team’s best player is QB Patrick Mahomes, and he’s likely headed for the NFL Draft after this season. The defense remains abysmal, ranked 115th of 128 FBS teams in points allowed per game (38.8). I realize some of that is a result of the offense, but regardless, the defense continues to let this team down. If Jesse Ertz can lead his team to a 44-point output against Tech’s defense, what will Baker Mayfield, Shane Buechele and Mason Rudolph do?

When a team knows its defense can’t stop anyone, it ends up doing things on offense that probably aren’t wise. Tech missed three 4th down conversions in the second half on Saturday, to which Kingsbury said, “We were going to play aggressively. Obviously, they scored some points in the first half. We felt like we had chance (on the fourth and 2) Dylan  (Cantrell) went up, made a play on the ball. It just didn’t’ go our way.”

But, because Kingsbury is in Year 4 on the job and still hasn’t figured out how to build a defense, he needs to take unnecessary risks at times.

Following Saturday’s loss to Kansas State, Kliff Kingsbury is now 11-18 on conference play since being hired ahead of the 2013 season. In the standings, the Red Raiders have finished 6th, 8th, and 5th in the Big 12.

Texas Tech has already played Kansas and picked up a win. So, there are no other guaranteed wins on this schedule. Also, there is no time off from here on out. The Red Raiders play West Virginia at home next Saturday (4-0), followed by Oklahoma, at TCU, Texas, at Oklahoma State, at Iowa State, and then Baylor at AT&T Stadium.

Tech is currently 3-2, but may be looking at another 4-8 or 5-7 season when all is said and done. Before the season I though the Red Raiders could be a dark horse in the Big 12. But, the defense remains porous, and penalties remain a problem.

The Red Raiders are averaging 10.2 penalties per game which ranks 127th of 128 FBS teams. That’s a direct reflection on a head coach. On Saturday night, Kingsbury team was penalized 8 times for 95 yards, compared to just 4 penalties for 21 yards from Kansas State.

“It’s not good enough, particularly against that team, because they don’t have many penalties,” Kingsbury said. “You can’t do that. You can’t have a special teams touchdown, give up nine penalties for 100 yards, give up a defensive touchdown and win here. It’s just not going to happen.”

As the “hometown hero”, Kingsbury’s leash is going to be longer than the average coach coming into to try and succeed. But, at some point, there have to be consequences, and results need to matter, right?

Kingsbury is a helluva offensive mind, but can he translate that into being a helluva head coach? In his fourth season, he has yet to do that and there’s little reason to believe that kind of success is coming anytime soon.