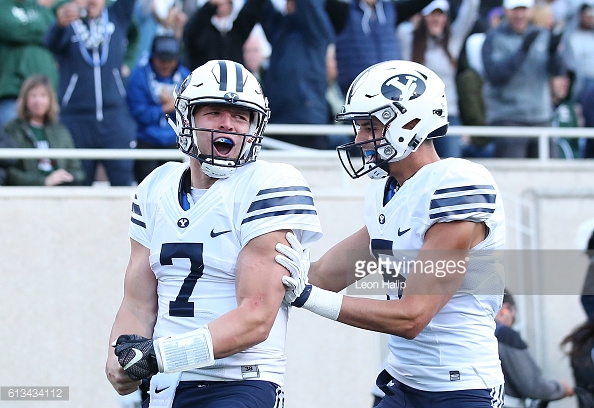 There are lots of problems going around the country this weekend. One happened to postpone a game featuring two Big 12 expansion candidates. We’ll keep the students and faculty at those schools in our thoughts and prayers. Then there is Houston. Yes, Houston still has a problem. In fact, they may have 99 problems with Tom Herman being one. At least, the Cougars have more pride than their crosstown rivals who tried sneaking out of the losers category with a bye week. Here at Heartland College Sports, we don’t let you off the hook that easy. Nice try, Rice. Houston isn’t the only expansion leader in trouble though. In fact, Tommy Tuberville will be lucky to have a job at the rate Cincinnati’s season is going.

On the flip side, there were some teams who tremendously helped their causes. Boise State may have had the best week of all. The Big 12 really needs to rethink their decision to eliminate the Broncos from contention. At least, consider the football only idea. BYU went to East Lansing and embarrassed a team who was supposed to compete for a Big Ten Conference Championship. UConn stated their case against an expansion leader, and South Florida continues to roll. What category did your expansion favorites fall into this week? Scroll down to find out.

UConn didn’t exactly “one-up” South Florida with this victory over a leading expansion candidate. But, when you bring the No.1 media market in the nation, an amazing academic profile, and a national championship basketball program to the table, South Florida will struggle to compete. All UConn needs to do is win and they did so over a major frontrunner here.

BYU has essentially played a Power Five conference schedule at this point. Five of their first six games have come against Power Five conference schools. They have a .500 record and could easily be undefeated with a break here-and-there. This week, they go to a hostile Michigan State environment, and embarrass the Spartans. If the Big 12 Conference does not invite BYU, it would say more about the agenda of the members of the Big 12 Conference than it would the survival of the conference. BYU brings a national audience, has a national championship under its belt, and competes well all-around athletically. By refusing to invite BYU, the Big 12 Conference continues to suffer.

Where do we start? First off, Houston loses. Boise State is officially in the driver’s seat for the Group of Five slot in a New Year’s Six bowl. Not only that, but if enough Power Five teams slip up, the Broncos could be in the College Football Playoffs. How so? Washington State walloped Stanford this week on the road. Oregon State defeated Cal. Oh yeah, Boise State went on a long road trip to a southern border state and took a 42-7 halftime lead against New Mexico. To say the least, Boise State had a fantastic week. However, they will only have five days of rest when they host BYU in a nationally televised affair Oct. 20. Circle that date on your calendar. Expansion fans everywhere will be tuned in.

The Bulls have looked about as good as any Big 12 expansion candidate this season. Their only loss came at the hands of Florida State, and they still placed 35 points up on the board that game. Perhaps, the best team remaining on the Bulls schedule is Navy. If Boise State slips up, South Florida may slip into a New Years Six bowl game. Look out!

The Tigers woke up for 31 second half points after trailing by double digits at halftime. This was not a pretty home victory, but a 4-1 record is nothing to be ashamed of. The only loss Memphis has suffered this season was on the road against Ole Miss. There have been reports that Memphis is no longer in contention as an expansion candidate, but these reports were never confirmed. The Tigers have a major booster, are in a nice geographical location and have a historic basketball program. There are a lot of nice things about Memphis, but rumor has it, the school is up to speed on their academic profile.

The Rams have struggled this season, particularly in games they needed to win. Colorado State picks up a home victory, but most Power Five teams would not have a problem pushing Utah State to the curb. Best of luck to the Rams next week against Boise State.

The Red Wolves probably deserve to be in the losers category this week, but we’ll be generous. It is Arkansas State’s first victory of the year and they are unbeaten in conference play now. We’ll also give them credit for being optimists. After all, you miss 100 percent of the shots you don’t take, and Arkansas State took a swing for the fences trying to get into the Big 12 Conference.

This is the type of paragraph sports writers do not enjoy writing about. The game was postponed due to Hurricane Matthew. Tulane understands why this is an important decision. After all, Hurrican Katrina forced the Green Wave to play the entire 2005 season on the road. This program has struggled since Katrina.

Our thoughts and prayers are certainly with the UCF family as they deal with Hurricane Matthew and the aftermath of this storm. The matchup with Tulane is now scheduled for Nov. 5.

Everything was laid out perfectly for Air Force. Absolutely everything! They have a national fan base that protects our nation. The geographical location is perfect. The Big 12 Conference once invited Air Force to the conference. All Air Force needed to do was win their first 11 games, and the nation would be keeping an eye on them against Boise State Nov. 25. Welp, the Falcons felt the effects of a crash landing in Laramie this week. Air Force is still in great position to make a bowl, but this is an awful look.

This is probably the end to Houston dominance. Tom Herman likely leaves after this season, and now there is virtually no shot at making the College Football Playoff. It’s unfortunate. This is a road game and the Cougars competed. Although bittersweet, this may be a positive. That “too much competition” argument is now thrown out the window. Cougars fans absolutely must show up to games now to prove they have a true fan base. Otherwise, they’ll just be looked at as A&M and UT fans purchasing a cheap staycation ticket which would destroy Houston’s chances of entering the Big 12.

Let’s put it plain and simple. Cincinnati can not compete in the Big 12 Conference. Three teams in bigger media markets in the American Athletic Conference have now defeated the Bearcats by double digits. They have struggled against UT Martin and Miami (OH). It’s a major reach to have Cincinnati join this conference.

SMU fans remind me of the Chicago Cubs fan base. They are the lovable losers of college football. The program seems to raise disappointment to an art. First, the Polyester Bowl. Second, the death penalty. Then there were 20-plus years of losing seasons before June Jones. Of course, Jones took them to four straight bowl games before becoming bored and leaving the program. Now, SMU is struggling to get rid of the moral victories. They receive another moral victory after having their hearts ripped apart in overtime. If Chad Morris is provided enough time, this program will become a conference title contender soon. However, that might not be in time for Big 12 expansion. SMU is also a Texas team, and many Big 12 schools find that to be a negative.

The Owls held a double digit lead at halftime on the road and squandered it. Temple doesn’t have much to provide aside from being the No.4 media market. However, Philadelphia is more into pro sports. Those who do root for college teams are more into Penn State, Rutgers and Villanova.

One good quarter kept the Huskies in the game at halftime. However, they still trailed 21-17 and the Broncos pulled away in the second half. Northern Illinois doesn’t have much of a chance as a candidate regardless, but this is bad publicity for a team trying to state their case.

Just because Rice did not lose this week doesn’t mean they’re out of the dog house. Nope. Not up in here. NOT UP IN HERE!!!!! They’ll look for victory No.1 against UTSA Saturday.

What the Big 12 Missed Out On

The Pirates can compete in baseball and have produced David Garrard. Outside of this, there are not many more positives. They canned succesful football coach Ruffin McNeill after the 2015 season, and this one is being flushed down the commode quickly.

A battle between two teams who have confirmed their elimination from Big 12 candidacy contention went to the Aztecs. San Diego State held a decent resume, but those west coast kickoff times are killer. Traveling to and from West Virginia wasn’t exactly an ideal situation either. The best case for San Diego State to join a Power Five conference is if the Texas Tech fan base gets their pipe dream of a wish: Arizona and Arizona State bolting to the Big 12. We’re 99.9 percent sure that will not happen, but whoever thought UConn and San Diego State would agree to be in the same conference? Yeah, conference realignment can be ridiculous at times.

This university was ousted because it pretty much brought nothing to the table. It was a bad week for the Lobos anyhow as Boise State invaded Albuquerque and left the school trying to figure out what just happened. The Broncos had a 42-7 halftime lead before calling off the dogs.

The Rebels can not wait for basketball season to get here. This is certainly not a football school. But hey, at least the students can get an internship working for a professional hockey now.