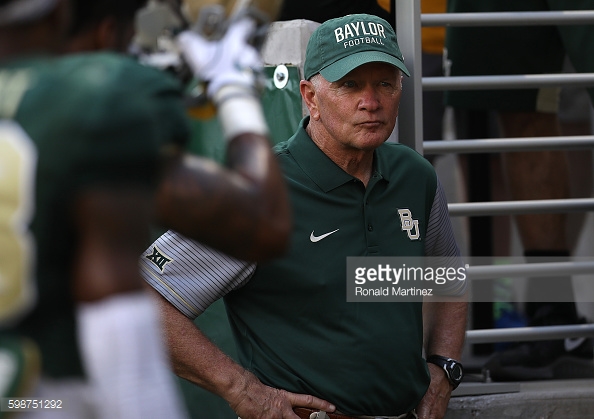 Baylor interim head coach Jim Grobe did not go along with the university’s version of how former defensive lineman Jeremy Faulk was dismissed from the football team over the summer.

Grobe says Faulk was suspended by the team after he was accused of sexual assault. He later KWTX TV to say it was not his decision to dismiss Faulk from Baylor and take his scholarship.

Faulk transferred to Baylor after playing at Garden City Community College in Kansas and was dismissed from the football team in June for violating the school’s and athletic department’s Code of Conduct after being questioned about a sexual assault that allegedly occurred on campus in April. He was also questioned about an incident while enrolled at Florida Atlantic.

Faulk was never arrested and has not been charged with any crime.

Baylor has remained under criticism for it’s handling of cases of sexual assault allegations.

Grobe was hired in May to replace Briles on an interim basis. At 5-0 this season, Baylor is ranked No. 11 in this week’s AP Poll and takes on Kansas this weekend.