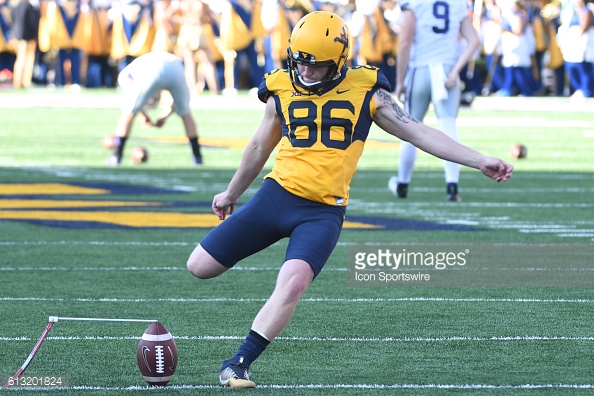 Josh Lambert was part of the West Virginia Mountaineers football team since 2013. He was a starter since his freshman year and has been an effective kicker over his tenure. But, on Tuesday, Dana Holgorsen announced that Lambert was no longer part of the football team. As for why? The rumors are still floating around and the reasons are unclear.

“We appreciate everything he’s done here. He’s had a great career here at West Virginia,” Holgorsen said. “We wish him the best going forward.”

Lambert had previously served a three-game suspension this season for violating Big 12 Conference eligibility rules and just returned for West Virginia’s last game against Kansas State. In his first game back, he missed his first field goal and wound up going 1 for 2 on field goal tries against the Wildcats.

Lambert finishes his career going 6 of 13 from field goals for 50+ yards. Very impressive for a college kicker. Outside of this year, his lowest field goal percentage was 73.9%. We wish Josh Lambert the best and if we hear any other news moving forward we will be sure to report it to you here.