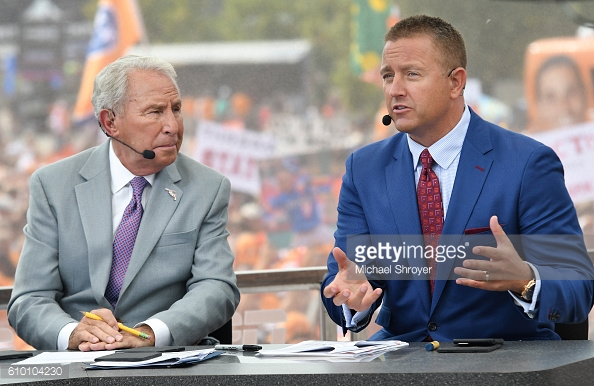 Last week on College GameDay, Kirk Herbstreit called the University of Texas football program a cesspool. But, Herbstreit joined CBS Sport Radio’s Gio and Jones and clarified his comments had nothing to do with Austin, which is perhaps his favorite city in America. It also was not a criticism of Charlie Strong or his players.

Herbstreit told Gio and Jones, ““It’s really more of the underbelly that I think is active on a lot of these college campuses. I feel like we’ve been talking about what’s wrong with Texas for a long time. In fact, for the last five-plus years now, Texas is 43-39. Mack Brown did some amazing things there, but it caught up to Mack, that underbelly the last three years. And listen, if a coach isn’t getting the job done, then he should be replaced. But at least support him and give him a chance while he’s the head coach.”

Herbstreit went on to add, “The rumors last week that anonymous sources say that Charlie’s done at the end of this year, imagine being in the building and trying to coach and recruit and build a program when you’re dealing with nonsense all the time. It has nothing to do with Texas, nothing to do with Charlie or the city or the fans. It has more to do with the coach (and) what he’s up against, and how, instead of supporting the program, people with a lot of powerful positions are constantly second-guessing.”

Check out the interview with my CBS Sports Radio buddies here.