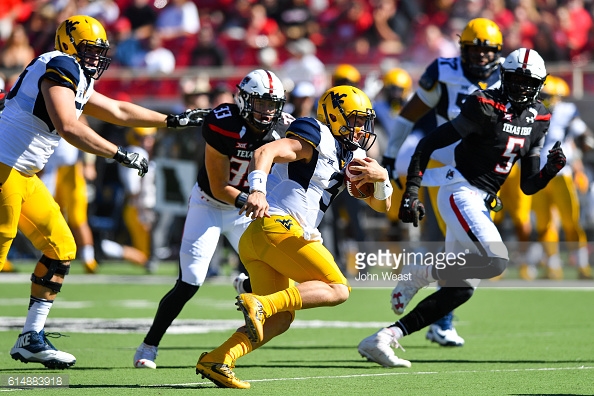 The West Virginia Mountaineers traveled to Lubbock, Texas, one of the toughest places to play in the Big 12, with plenty to prove. WVU was ranked in the Top 25, but there were still many doubters. They struggled and had to come back against Kansas State, they barely held on to beat BYU, and their SEC win over Missouri, despite its dominance, didn’t do much to satisfy some.

But, Saturday against Texas Tech, WVU controlled the game from start to finish, rolling to a 48-17 win over the Red Raiders. Quarterback Skyler Howard had his most efficient game of the season. Howard completed 21 of 31 passes for 318 yards with a touchdown and no picks. On the ground, the senior had 12 carries for 89 yards with a pair of scores.

Once again it was the running game, which has been the catalyst for WVU’s success all season long, that stood out. The Mountaineers ran the ball 46 times for 332 yards, averaging an absurd 7.2 yards per carry. Unbelievable. Justin Crawford left the game with an injury, finishing with 7 carries for 42 yards and a score. He was replaced by freshman Kennedy McCoy, who ripped off 4 runs for 99 yards, and got hurt himself. Then, there was the workhorse Rushel Shell, leading the way with 21 carries for 104 yards and two touchdowns. As for the focus on running the football, coach Dana Holgorsen said, “Our goal was to the control the ball and shorten the game.” Well, the Mountaineers certainly did that.

While many expected West Virginia to be solid on offense, it’s the defense that has continued to surprise. Defensive coordinator Tony Gibson deserves a ton of credit for what he’s done with this group. WVU replaced 8 starters from last season, and the unit has not missed a beat. On Saturday, West Virginia made Texas Tech QB Patrick Mahomes look human. Sure, he stat line is still solid (28/44, 305 yards, 1 TD, 1 INT). But, Mahomes was the nation’s leading passer coming into the game and Tech had a streak of 9 games scoring at least 50 points at home snapped. WVU started the day ranked in the top-30 nationally in points allowed per game, allowing 20.0 per contest.

With the Mountaineers now 5-0. Holgorsen credits his upperclassmen, adding, “We’ve got good senior leadership. We lost good leaders and seniors last year, but that group showed this group how to do things right.”

Some WVU fans might look at this start with trepidation. WVU started the 2012 season 5-0, before going 2-6 down the stretch, which included a 38-14 bowl loss to Syracuse.

But, the program is in a completely different place right now than it was in 2012. In 2012, WVU was in its first year in the Big 12 conference. Coach Holgorsen didn’t have the depth to his program that he has this year. There’s plenty of reason to be excited right now in Morgantown.

As for the undisclosed injuries to Crawford and Kennedy McCoy, Holgorsen said in the postgame in a very matter-of-fact fashion, “I think both those guys will be fine.” That’s a big sigh of relief for West Virginia fans.

Next up, another chance to shine in the national spotlight, as the Mountaineers will face idle TCU next Saturday in Morgantown in a game that will kick off at 3:30 p.m. ET and will be televised nationally on either ABC or ESPN2.