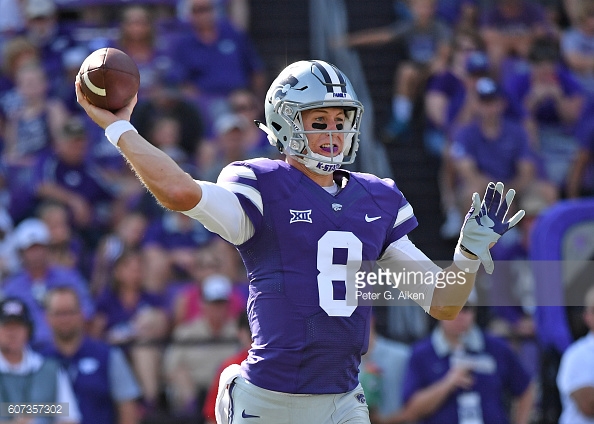 Kansas State has the best defense in the Big 12. It’s not even all that close. Dante Barnett. Jordan Willis. Will Geary. These names help make up a defense that, if combined with an above-average offense, can actually challenge for a Big 12 title in a parity-laden season.

But, the problem is the Kansas State offense, which has gone from mediocre, at best, to bad. Quarterback Jesse Ertz got hurt in the first half of Saturday’s game against Oklahoma. Ertz, who wasn’t exactly lighting it up himself (completing under 50% of his passes for the season), feels like Troy Aikman compared to what the Wildcats replaced him with in Joe Hubener.

We’ve seen the Joe Hubener story play out before and frankly, it’s not a story any Wildcats fans want to see again. Nor, should they be subjected to it again.

On Saturday, Hubener finished 12 of 23 for 157 yards and a touchdown. Those numbers actually make Hubener’s day look better than it was. The numbers were skewed by a late 54-yard touchdown pass to Dominique Heath.

Last season, Hubener completed 47% of his passes for 1837 yards, with 9 touchdowns to 10 interceptions. Hubener replaced Jesse Ertz when he got injured last season, and led the Wildcats to a 3-6 record in Big 12 play.

Unfortunately, it looks like Snyder will be sticking with Hubener, if Ertz cannot play next week at home against Texas. “I can’t answer the question right now,” Snyder said. “Joe obviously is the number two quarterback, so if Jesse couldn’t go, in all likelihood that’s who it will be.”

What a mistake. As a senior, we know what Joe Hubener is. At best he’s a second-string quarterback in a Power 5 conference. But, not one you would typically have a lot of confidence in.

It’s time for coach Snyder to turn to the page to redshirt freshman Alex Delton or true freshman Skylar Thompson.  Delton has been in the program since January of 2015 after graduating from Hays High early. Thompson was a top-ten dual threat QB in the country when he was recruited out of Fort Osage. Like Delton, Thompson enrolled early this past January. One of Thompson’s many high school accolades includes being named the 2015 Missouri Gatorade Player of the Year.

Considering Jesse Ertz has been far from a stud at QB this season, and has been injury prone, both Delton and Thompson deserve a chance to start in 2017. But, why not get that process going right now?

Now, the flip side of this is that maybe Delton just isn’t impressing the coaching staff in practice like everyone expected. As disappointing as he is, there is a reason Hubener is the No. 2 QB. OK, then give Thompson some run.

Yes, he’s a true freshman, but look at Shane Buechele. Sure, the Texas QB was a more highly-touted recruit, but true freshmen have shown they can do it and benefit from game action. K-State should not be worried about losing a red shirt season for Thompson. Oklahoma State took that route in 2014, as Mason Rudolph began as the third-string QB behind J.W. Walsh and Daxx Garman. Rudolph was forced into action late in the season, helping the team beat OU and win it’s bowl game over Washington. The rest is history, as Rudolph could throw his hat into the ring for the NFL Draft next spring, or return in 2017 as a Big 12 Player of the Year contender. Rudolph getting those reps late in the 2014 season gave the entire program a lift and reason for optimism as they prepared for 2015.

There is still plenty to play for this season for the Wildcats, who have the defensive chops to keep them in most games. But, when it comes to QB, there is a long-term benefit, and quite possibly, a short-term benefit to putting Alex Delton or Skylar Thompson under center. As Donald Trump has said through his campaign, “What do you have to lose?” Or, to show fairness to both candidates, one of Hillary Clinton’s infamous lines can be applied to this K-State QB situation, “What difference does it make?”

The answer to both questions: Nothing and none.