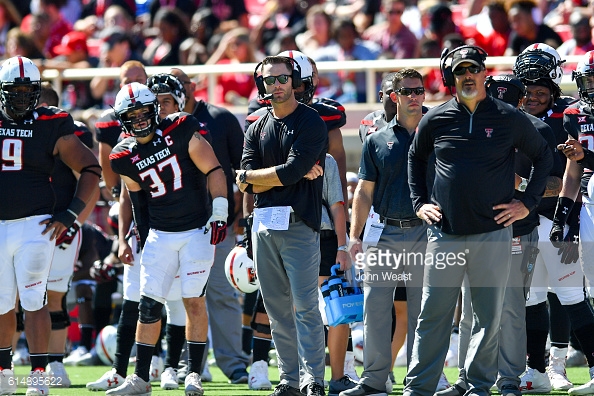 “I’m embarrassed. I have to apologize to the fans, student body and alumni. That was as bad as it gets.”

Texas Tech head coach Kliff Kingsbury made that comment after his Red Raiders were ripped by the West Virginia Mountaineers 48-17 on their home turf in Lubbock, Texas.

When Kingsbury addressed what his team needs more of, he admitted what many have known since he took the job, saying, “Just mental toughness. I’ve obviously not done a good job of doing that. I thought there we came out and scored right out of halftime and made it 24-10, down two scores, and they go right down and answer and we just didn’t respond. We are lacking in that department. When things get tough, we don’t handle it well.”

Kingsbury’s teams have often played similar to their coach’s looks: flashy and smooth, but in many ways an empty suit. When times are tough, Kingsbury’s Red Raiders do not respond. In 2013, Texas Tech lost its last 4 regular season games by at least 18 points. In 2014, there were 4 games lost by at least 18 points. Last season that number was reduced to just 3 losses by at least 17 points. Hell, Tech lost a game 82-27 to TCU in 2014. If that’s not quitting, I’m not sure what is.

But, yesterday, Kingsbury insisted his team never gave up, saying, “I don’t think they quit. I just think we started flat and stayed flat and never rose up. We just didn’t play our level — ever.”

The reality is that Kingsbury has to say that. Any coach who admits his team quit is writing his own pink slip. He can’t do that. But, too many times over Kingsbury’s tenure, the Red Raiders have appeared to give up when trailing in a game late.

Back to Saturday though, don’t forget it was also Homecoming Weekend. The weekend that some of the biggest alumni come back to their old stomping grounds to try and feel those positive vibes from the football program and the university. Often times, it’s also a big fundraising weekend for the school. But, on Saturday, any good will was likely gone by halftime. And kudos to any TTU fans who hung around til the end, although based on what the stands looks like on TV, there weren’t many of you.

I understand why. The disgust is reasonable. Some, myself included, though Tech could be a darkhorse to win the Big 12 conference. Instead, just last week I questioned whether or not Kingsbury should be on the hot seat.

Now comes a huge game against Oklahoma at home. Baker Mayfield’s return to Lubbock. You think Mayfield wouldn’t love the chance to run up the score a bit on his former team? You know he would love that. So, with Texas Tech entering its toughest stretch of the season (OU followed by TCU, Texas, OK State), let’s hope Kingsbury can turn things around. Or, at least prevent his guys from quitting.