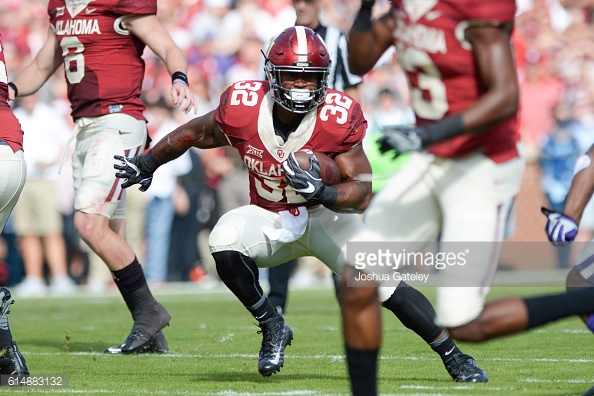 Stoops announced that running back Samaje Perine will miss at least two weeks, possibly three, recovering from a hamstring injury. Perine suffered the injury early in Oklahoma’s 38-17 win against Kansas State. Perine got off to a solid start, rushing for 23 yards on three carries, along with a 25-yard touchdown catch to put OU on top early. But, the hamstring tweak came on that touchdown play and Perine was done the rest of the afternoon.

After the games, Stoops downplayed the injury, saying Perine could have played if he’d been forced to.

Oklahoma’s schedule looks as follows: on the road to play Texas Tech on Saturday, and then games against Kansas and Iowa State. So, thankfully this is the soft spot of OU’s schedule. Joe Mixon is more than capable of being the every-down back against those three teams before the harder stretch comes of Baylor, West Virginia, and Oklahoma State.

So far this season, Perine has rushed for 475 yards and six touchdowns, for 4.5 yards per carry. He has 8 catches for 94 yards with a touchdown.