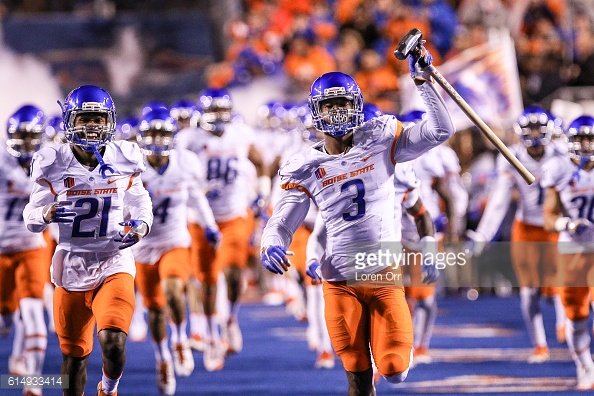 The Big 12 Conference took another smack in the face this week. It has been confirmed that five schools have been provided notice of their elimination. Yes, that includes Boise State. This week, those five schools combined for a 4-0 record with the other team having a postponement. What’s worse? If West Virginia or Baylor slip up, Boise State is salivating at the opportunity to pounce on any opening in the College Football Playoff.

Also, many Big 12 schools do not want BYU into the conference. The Cougars knocked off an SEC school this week. Add this on their already impressive road victories against a Pac 12 school and a Big Ten school. The only thing keeping BYU out of the conference is snobbery by Big 12 Conference school presidents.

Additionally, the Big 12 Conference wanted to enter the Florida market by trying to poach Florida State from the Atlantic Coast Conference. Well, South Florida is making some noise and the Big 12 should at least consider the Bulls. The Tampa school certainly features one of the most underrated teams in the nation.

Houston, you may have a problem. Everything is pointing south for the Cougars. They suffered a loss, effectively ending their chances at a spot in the College Football Playoffs. This week, they were nearly upset at home. Power Five programs are making early firings and Tom Herman is the No.1 name on everyone’s Christmas wish list. It’s also clear that Houston has virtually no shot at being added to the conference with the schools outside of Texas wanting to keep the Lone Star State to a maximum of four teams. It seems this campaign is on its final legs.

Another crazy week for the conference expansion candidates. Just scroll down below to see how each candidate did.

Provo, Utah can be proud of its team for playing six Power Five schools in seven games. This team finished .500 playing, essentially a Power Five conference schedule. All of their losses came within a field goal, and they picked up a double digit road victory against a Big Ten school. Tack on a victory over an SEC school now. Now BYU can do something Big 12 schools have struggled to do in recent years: beat Boise State. The big game takes place on national television this Thursday.

This team is underrated. They should be ranked. The Bulls have placed up at least 35 points on the board every week. Their only loss is to a solid Florida State team. South Florida currently averages 19.8 more points per game than they allow. It only helps that Syracuse, a Power Five team they defeated on the road, upset a ranked Virginia Tech team this week. I’m buying the South Florida stock.

Another week, another win. The Broncos are currently two spots behind Houston in the polls, but Boise will play BYU on national television Thursday. It seems Boise is in the driver’s seat for a New Years Six bowl appearance. If the chips fall into the correct places, we may finally see Boise State actually have the opportunity to play for a national championship. Baylor and West Virginia fans reading this are shaking their heads right now in disagreement. The easy solution for those two programs to keep Boise out: win all your games.

I love this victory. Why do I love it? Because Arkansas State did what San Diego State couldn’t do: beat South Alabama. Now the Red Wolves are 2-0 in conference play, and what if they run that table? Well, they likely won’t get invited to the Big 12 Conference, but it will be fun to watch.

A road loss to Ole Miss is the only bump these Tigers have hit on their road to a potential New Years Six bowl. Yes, that is a possibility if Memphis wins their conference title and someone dethrones Boise State. The Tigers will have to pick up a road win against a tough Navy team first though.

The “H-Town Takeover” is starting to seem a lot like the Gary Johnson campaign. There was once tons of momentum, and at one time, a chance to be on the big stage. However, when the Big 12 started acting like the Commission of Presidential Debates by turning their noses up to the idea of expansion, Houston had their “Aleppo” moment by losing to Navy. Now, they are struggling to win conference games at home. They did pick up the victory and are currently ranked ahead of Boise State.

This was a major victory for Temple. However, what’s a major victory for Temple is not seen as major in the eyes of the Big 12 Conference. Yes, it’s a road win in conference play. Temple took one step closer to being bowl eligible, and the victory comes against a team who has a better resume for expansion than Temple does. There is a lot to like about this win, but a Big 12 team should murder UCF on the road. Temple doesn’t have much to offer other than being in a major media market.

Last week’s loss to Wyoming was bad. This loss is just downright humiliating. What’s worse? If New Mexico was on the old MTV show “Next”, the Big 12 would’ve spoken the word before the Lobos could get off the bus. That’s how pathetic this result by Air Force is.

Look at the conference record. That is horrendous. Absolute failure right here. Sorry UConn, but basketball is not what will get you into the Big 12 Conference.

Another major opportunity for Colorado State slipped away. The Rams could’ve spoiled everything for the Broncos and they squandered it. Even worse is the fact Colorado State sports a losing record more than halfway into the season. All around, there is nothing but negatives here. If there was ever a season for Colorado State to have stage fright on national television, this was not the year. It seems that is the case though.

The Golden Knights lost at home to a team who has a downright pathetic football history. UCF held a 25-14 lead heading into the locker room, then got shut out in the second half. Head coach Scott Frost got outcoached plain and simple. Remember, Temple was kicked out the Big East.

The Green Wave have to start providing results if they truly want to be considered for Big 12 expansion. Their only positive claim to fame at this point is going unbeaten in 1998 and being left out of a BCS bowl.

Oh, so close. Yet, so far away. Rice must now win out to have any shot of a bowl appearance.

Like Rice, Northern Illinois must now win out to appear in a bowl game. Unlike Rice, the Huskies actually have a victory. Also, losing to Central Michigan at home does not provide Northern Illinois any favors when they try to compare themselves to Oklahoma State.

The Bearcats had a much needed bye week. After starting conference play 0-3, Cincinnati needed some extra practice reps to find itself. They’re not the only American school struggling. A prime opportunity to get back on their feet comes next week against an East Carolina team who seems to be taking a free-fall. This game may determine which of the two teams, if either, make it to a bowl game.

The Mustangs have a tough task ahead of them next week when Houston shows up to Gerald J. Ford Stadium. If SMU pulls off a massive upset, the recruits may follow. Chad Morris is a tremendous recruiter, and rumors have it that Tom Herman has one foot out the door. A major letdown by the Cougars would certainly throw the ponies into the winner’s circle. We’re not banking on that happening though.

What the Big 12 missed out on

Huge victory for the Lobos here. This keeps New Mexico in contention for a bowl appearance, and it comes over a team who has been invited to the Big 12 Conference once before. All smiles in Albuquerque after this road victory.

A nice road victory for the Rebels to keep their bowl hopes alive. Outside of a road matchup against Boise State, UNLV should be in a bowl game as long as it takes care of business.

The Aztecs should be 6-0. We’re all still scratching our heads on how San Diego State lost to South Alabama. Answers? Anyone? Bueller?

This game will take place Nov. 19. We certainly wish the best for anyone who experiences flooding.