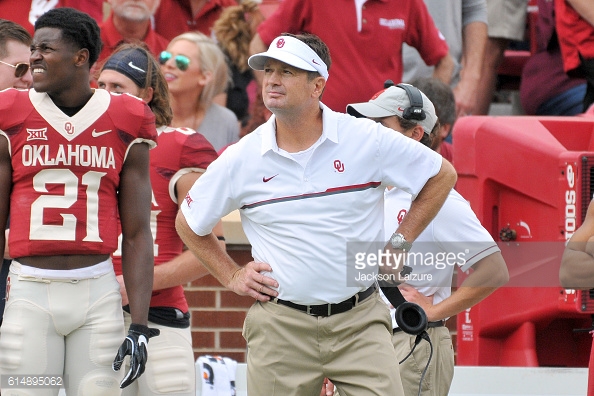 Oklahoma found themselves in the winners circle of another Big 12 conference game, giving the Sooners ten straight conference wins dating back to 2015. Since 2011 the Big 12 has had a round robin schedule each team playing all nine of their conference foes. Since that has happened no team has gone unbeaten in Big 12 play, ZERO. The truth of the matter is, it’s very hard to beat every team in your league, but I am here to tell you that for the first time since that inception: Oklahoma will finish 9-0 in the league, and it may not even be close.

Yes, yes we know. Oklahoma is a two-loss team, and they were embarrassed on their home turf by Ohio State, and lost by double digits after a sloppy performance in Houston. But, the Sooners are now 3-0 in conference play. There are six games to go, and the Sooners have already played the two teams in the conference that have comparable talent in Texas and TCU. Oklahoma will not only be more talented than each of its last six opponents, but they will be playing the toughest of the six at home. Stoops will also be the best coach on the field in each of those games. ESPN’s FPI thinks so too, they give the Sooners at least a 70% chance to win each of their remaining games. The only one not that high is the Sooners trip to Morgantown, where FPI gives the Sooners a 53% chance to win that game (a number I expect to rise after TCU upsets WVU this weekend).

Sure, the loss of RB Samaje Perine for the next couple of weeks is a blow to the team, but Joe Mixon is more than capable of carrying the load. He’s especially capable when you consider it comes during the soft spot of OU’s schedule that includes Texas Tech, Kansas, and Iowa State. Freshman Abdul Adams will get some reps under his belt. He was a 3-star recruit out of North Carolina, but had offers from Alabama, Michigan State, Florida, Notre Dame and other top-tier programs.

If the Sooners do in fact run the table, and do so in a dominant fashion, Oklahoma is not by any means completely out of the college football playoff conversation. While many would site that other tw0-loss teams would get in over Oklahoma because of the conference championship game, and the perception of a weak Big 12, we have absolutely no idea how the committee handles a completely unscathed Big 12 champion. What else do you have to prove if you beat every single team in your conference? There is not a lot more you can prove, and I think the committee would keep that at the top of its mind.

Also, contrary to national media opinions, the Big 12 is also not nearly as bad as some would have you believe. TCU, Oklahoma, Oklahoma State, and Baylor are once again all strong teams, and add West Virginia to the mix and suddenly this conference is far from “weak”. TCU has two home losses to ranked teams, and probably should not have lost to Arkansas. In Stillwater, Oklahoma State should be a one-loss team, but they were quite frankly screwed by poor officiating. Oklahoma blew its game against Houston, but may have a chance for redemption. Buckle up guys it will be a wild ride.

As the Sooners defense continues to get healthy, and the Sooners offense continues to hum, all doubts should continue to subside in Norman. Despite the doomsdayers around the OU program, the Sooners have a pretty darn good shot at winning 11 games again, which would make it 11+ wins in three of the past four seasons. Sooner fans should be more optimistic, even if chaos does not ensue, the Sooners should get a crack at either Alabama or Texas A&M in the Sugar Bowl. If that’s the end result for this season, it will once again be considered a successful one for Bob Stoops.