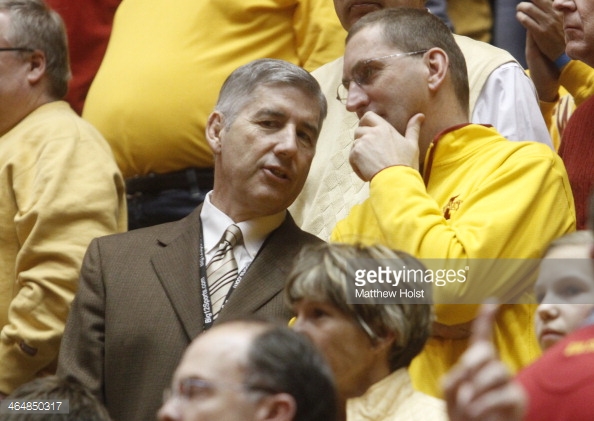 With the Big 12 deciding to stay put at 10 teams, David Boren made a conscious effort to say on Monday afternoon that the decision was a unanimous one. Well, since then we learned that wasn’t necessarily true.

One person who’s been somewhat outspoken is Iowa State athletic director Jamie Pollard, who has shown unity behind the power brokers.

He was a guest on KXNO radio Tuesday morning, and Pollard basically admitted that Texas and Oklahoma control the steering wheel in the Big 12.

Wow, strong, but honest and brilliant stuff from Pollard. Some people have such chips on their shoulder they hate being called “little brother”. Iowa State is one of those “little brothers” in the Big 12, but he readily admitted that they are receiving the revenue they are because of Texas and Oklahoma. Thank you, Mr. Pollard! This kind of admission is long overdue. Now if only some of your AD friends in the Big 12 could join you…

Pollard went on to say, “It’d be like someone saying “I don’t want [former Iowa State basketball player] Georges Niang on our team because he shoots too many shots. OK, we can take Georges Niang off our team, let’s see how good would have been over the last several years. We’ve got two star players. Whether people want to like that or not, we’ve got two star players, Texas and Oklahoma. And I’m glad to be on a team that’s got two great players. And we benefit from being on that team.

We could go play on that weaker team and be the star but then everybody would be saying ‘How do you get us in one of those Power Five conferences Mr. AD?’ So I think the best thing for the Big 12 is the waters — everyone else that’s talking about what they think they know is the right answer to quit talking about it and let the ADs just go do what they need to do.”

Pollard’s honesty is beyond refreshing and he should be applauded for it.

To listen to Pollard’s interview in it’s entirety, please listen below.