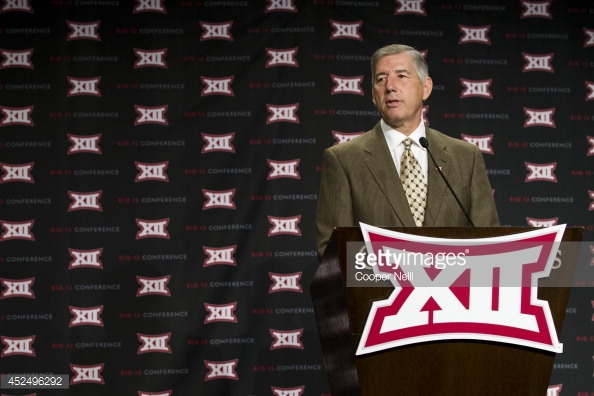 On Monday afternoon, Big 12 Commissioner Bob Bowlsby and University of Oklahoma President David Boren sat together following the president’s meeting and said that the conference’s vote against expansion was unanimous. But, on Tuesday, a report came out rejecting the idea that all 10 Big 12 presidents were actually on board with avoiding expansion.

According to ESPN’s Brett McMurphy, when schools that were favoring expansion realized that they couldn’t reach the vote threshold to withstand, they went along with the rest of the conference.

And the ESPN report cites what is says is a leaked Big 12 memo full of “do’s” and “dont’s” that included indicating the conference’s Board of Presidents came to “Unanimous Consensus.”

“When presidents get in a room and read the tea leaves that it’s going the way it’s going, they go with it,” ESPN cited an unnamed source as saying. “Even if there were 1, 2, 3, 4, 5 [schools in favor of expansion], those presidents are very skilled in seeing the inevitability of the outcome and aligning on the right side of history. It’s pretty easy to get comfortable with that position and stick to it.”

The memo also reportedly urged Big 12 officials not to repeat Boren’s past comment that the 10-team setup left the league “psychologically disadvantaged.”

Once again, to see the full list of ‘do’s’ and ‘don’ts’ sent out in the memo, see the ESPN article here.