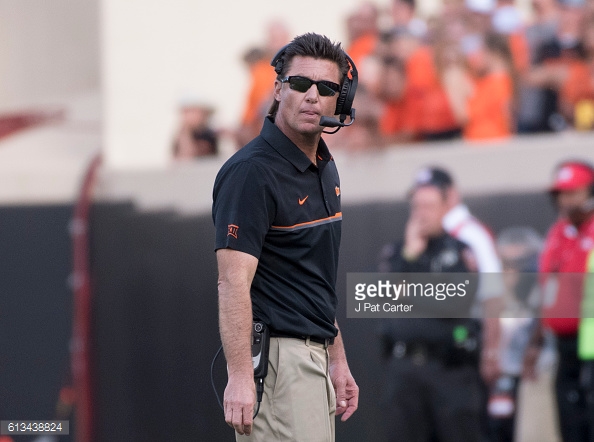 Or did they?  It really felt more like Kansas lost.

Did any OSU fans feel comfortable during that game?  I know it ended up looking like a blowout, but even when the Pokes were up by 14 towards the end I was nervous.  The Jayhawks controlled most of the game, and if not for a few mistakes it probably ends with a reversed score.

The easiest stretch is over, and honestly coming off a bye week I’m sure OSU fans hoped for a little bit more improvement.  A few reoccurring problems for the Cowboys reared their heads today, and they are worrisome as they reach the meat of their schedule.

Can anyone on the team not named Jordan Sterns make a tackle?  Whiff after whiff after whiff.  Kansas running back Ke’uan Kinney set a career high for rushing because linebackers and defensive ends simply missed easy tackles on him.  The secondary was marginally better, but how many times should he have been stopped for a loss or a short gain but the defender just couldn’t get it done.  The Jayhawks receivers took advantage too, constantly catching short  passes and then scooting beyond the first down marker after another Poke missed a tackle. The Cowboys have a defense filled with elite athletes.  They are big and fast.  They are long.  They are tough.  But, that being said … they can’t tackle.  I know Gundy favors low contact practices to avoid injuries but maybe it’s time to strap the pads on and let them knock each other around a bit.  I think the Oklahoma Drill would be a great thing for this team.

The second issue was Mike Yurcich.  Oh, Mike Yurcich!  I really go back and forth on him because sometimes he’s brilliant, but he often out thinks himself.  With the Jayhawk defense playing to stop Washington and the receivers, with the talented KU defensive line pinning their ears back to get to Rudolph, and with the run game working better than it has in three years, he again fell in love with the pass.  James Washington is one of the best receivers in the country, probably the best in the Big 12, but if they are taking him away why would Yurcich try to force the deep balls? On many of Rudolph’s sacks there wouldn’t be a receiver underneath.  Maybe Rudolph was calling audibles to keep the running back or cowboy back in to block instead of sending him on a route. But, having no hot route is a giant mistake.  Just send someone into the flat, or have a shallow crossing route.  Sending every available receiver 20 yards down field with a suspect offensive line is just asking to get your star passer hurt.

I’m really not that down on this team, but I’m not that high on them either.  This team just isn’t that good.  They aren’t bad, but they aren’t great.  Yes, they should’ve beaten Central Michigan and got hosed by the refs. But, they also shouldn’t have let what has turned out to be a bad Chippewa team be within one score at the end of the game.  Without a few fumbles by the future of the Cowboy running game, Justice Hill, they probably win in Waco.  But reality is they did lose both those contests and now instead of 7-0 they sit at 5-2, one win shy of extending the bowl streak.

Now, with a straight face tell me which game they have left is a guaranteed win.

West Virginia next week?  Against the Great Wizard Bill Snyder in Manhattan? Texas Tech?  TCU in Fort Worth? Bedlam in Norman?

None of these teams is an unbeatable juggernaut, but every game is losable.  The two easiest games on paper, KSU and TCU, take place away from Boone Pickens Stadium, and Texas Tech may not play defense but they can score 80 points on anyone, anywhere.  In my mind all these games will require mistakes from the opponent or a flawless game from the Cowboys.  While I find it unlikely that Oklahoma State will lose all of their remaining games, it’s not implausible.

In a way the season is just starting.  This is the part of the year when a team’s depth on defense has to show up, when the offense should be in rhythm, and the team as a whole should have an identity.

They didn’t really show much of any of those things today.  Hopefully it was just an early kickoff in a mostly empty stadium in Lawrence lulling the team to sleep, but I think Cowboy fans may be in for a bumpy ride.