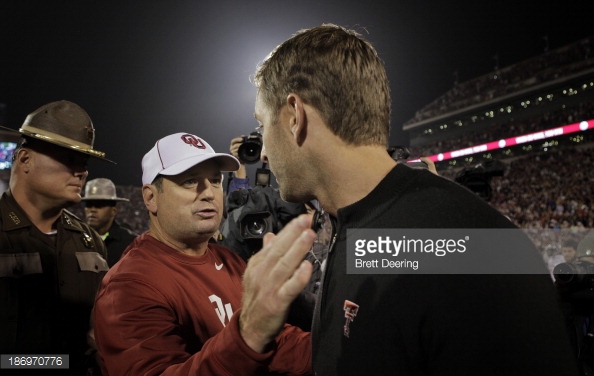 We know the Big 12 isn’t known for its defense. But, what happened Saturday night in Lubbock was a joke and an embarrassment.

I understand high-scoring offenses, up-tempo, and all that jazz that goes into what Big 12 football has become. And frankly, I like it, for the most part. Give me a 35-31 game over a 10-7 slug fest any day of the week.

According to ESPN, at least seven FBS records were broken in this game.

Oklahoma and Texas Tech set the FBS record for combined yards in a game with 1,708, both racking up 854 yards apiece. The previous record of 1,640 yards was set by San Jose State and Nevada in 2001.

Here is a list of some of the other records broken.

Oklahoma and Texas Tech got together Saturday night and did this to the NCAA record book. pic.twitter.com/sSHO7T9MH0

There’s a difference between allowing up-tempo offenses to skew a box score and just watch two terrible defenses.  Oklahoma allowed Texas Tech to convert 20 of 25 third downs. On top of that, seven of those times Tech was in third and at least 10 yards, in which Tech converted all seven of them.

But, this is part of a bigger image problem for the Big 12. In many cases, the conference already feels like the “little brother” compared to the other Power 5 conferences. One of the knocks is the apparent lack of defense, which is defended by Big 12 folks saying that it’s the offensive styles that make the defenses look worse than they really are.

Well, there the Sooners and Red Raiders were, in prime time on Saturday night. It was another chance for the conference to prove it puts at least the slightest semblance of importance on defense. Alas, it was not meant to be.

Here was the final box score.

It leaves you speechless, doesn’t it? And I don’t mean that in a flattering, Kate Upton, kind of way. More of a horrible car wreck speechlessness. The tackling at every turn by both teams was a total mess.

Remember a few years ago when the knock against the Big 10 was that the conference had really good defenses, but no offense? The Big 10 was viewed as one of the worst Power 5 conferences for football. But, between moves like expansion and hires of Urban Meyer, Jim Harbaugh, and offensive minds like Kevin Wilson, that stigma has quickly worn off. The Big Ten is universally considered one of the top 2 Power 5 conferences in the country.

I’m not saying the Big 12 needs to go out and make drastic coaching changes at the top and become a bunch of three yards and a cloud of dust offenses. But, eventually, defense has to become more of a priority if any of these programs want to compete for national championships.

Teams can play defense in the Big 12, if they want to put a priority on it. Kansas State is the conference’s best defense. Granted, they play a ground-and-pound, slower style of offense. But, West Virginia is an offense-first team led by Dana Holgorsen, but look at the defense that’s been built by Tony Gibson in Morgantown this fall. Don’t tell me it can’t be done.

Oh yea, and West Virginia and Kansas State are two of the biggest surprises in the Big 12 this season. Think it’s a coincidence? I don’t.