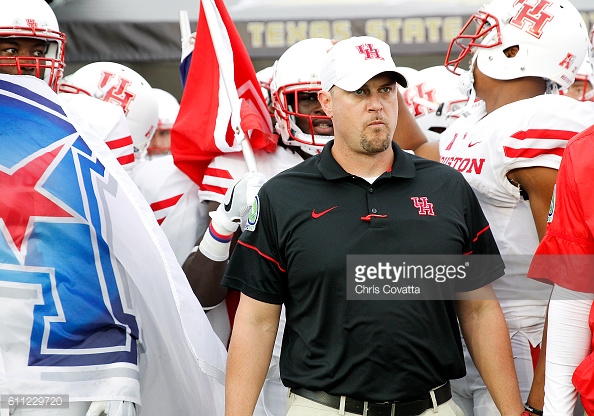 Ah, our old pal Tom Herman is back in the news.

According to Benjamin Albright, Houston head coach Tom Herman will, at some point, be joining the Texas Longhorns as their next head coach. Albright is a radio host in Denver, and has appeared on Yahoo!, ESPN, and Fox Sports.

Big rumor today is that Tom Herman to #Longhorns is “all but offical.” Reliable sources saying what has been suspected for awhile now.

In the various Texas people I’ve spoken with since this report on Monday night, this report does appear to be the real deal.

Either way, is this shocking? Not in the least. Houston fans who really believed Tom Herman was all about the #HTownTakeover were always going to be sorely disappointed. It’s kind of like the really old rich guy who thinks the 30-year old smoke show is with him for his personality and looks.

Houston looked awful in a loss to SMU over the weekend. It makes you wonder if the rumors surrounding Herman has eventually caught up with the players, and that they may even know more than we all do at this point. Who knows? But, I know it won’t be the last we hear of this.