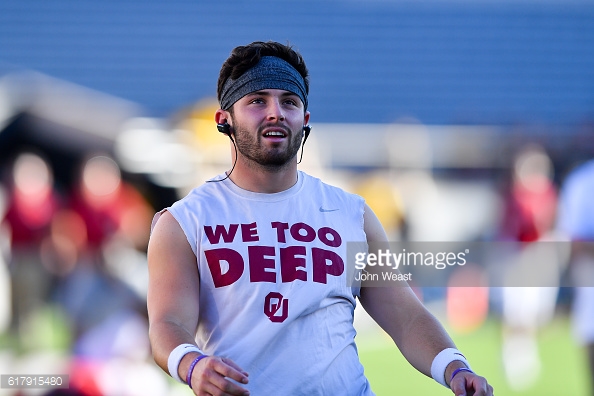 We knew it would be a raucous crowd at Jones AT&T Stadium on Saturday night with Baker Mayfield making his return to Lubbock. Mayfield walked on at Texas Tech before leaving the school due to scholarship issues The Oklahoma QB had a monster game in the 66-59 Sooners victory, finishing 27-of-36 for 545 and a program-record seven touchdowns.

But, maybe the huge game, combined with the win didn’t help Mayfield’s cause when it came to the Red Raider faithful.

Stay classy, TechRT @AJ_KristaPirtle: Trash is thrown on the field as Baker Mayfield heads up the tunnel pic.twitter.com/ijAWjGYBKG

They dislike @baker_mayfield6 tht much at TT he has to be escorted by troopers & do post game interview in the tunnel whr they do that at! pic.twitter.com/skpBpL1KZy

Not a good look for the Texas Tech fan base. You guys are better than that.