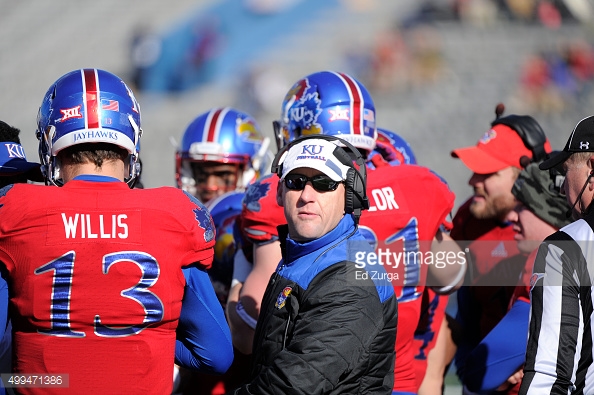 When it comes to the rebuild by Kansas Jayhawks head coach David Beaty, improvements must be evaluated in baby steps. After beating Rhode Island in the season opener, KU has lost 6 in a row and sits at 1-6 this season. But, while there is reason for optimism in Lawrence thanks to KU’s defense, the offense has to begin showing signs of life.

As a team, Kansas has the third-ranked pass defense in the Big 12 and the rushing defense is ahead of Texas Tech and Iowa State. In 2015, KU ranked last in the conference in pass defense, second to last in rushing defense, and last in total defense. With this season more the halfway over, KU is right in the middle of the pack in total defense, sitting at 5th in the Big 12. Additionally, the Jayhawks defense ranks third in the conference in sacks, fourth in interceptions, and leads the Big 12 in opponents 3rd down conversions percentage. In its seven games, Kansas has averaged 8.14 tackles for loss, tied for ninth in the nation. This all becomes even more impressive when considering the high-powered offenses Kansas has already played including Texas Tech, Baylor, and TCU.

Individually, Kansas’ Dorance Armstrong is tied for 2nd in the Big 12 in sacks (also 2nd in Tackles For Loss), while Cameron Rosser not far behind at 7th. Defensive coordinator Clint Bowen deserves a ton of credit for helping this unit turn things around.

But, while the defense has made the necessarily strides to help bring Kansas back to being competitive at the Power 5 level, it’s the offensive woes that are killing this team. Specifically, the turnovers have been a massive problem. We are just 8 weeks into the season, and KU is up to 25 turnovers lost. To put this number in comparison, only 16 teams nationally had more than that in the entire 2015 season.

KU is dead last in the Big 12 in turnover margin, by a wide margin. The Jayhawks are -13, which is far behind 9th ranked Oklahoma, who’s -5. Also, Kansas is ranked last in 3rd down conversions at about 33%, over 7 points behind 9th ranked Iowa State. As for offensive team rankings, KU is in the bottom 3 in the Big 12 in total offense, rushing offense, passing offense, and scoring offense. These struggles fall on head coach David Beaty, who is the offensive mastermind of this team and whose background is exclusively on the offensive side of the ball.

The good news is that the spirit amongst this group remains high. During Monday’s Big 12 coaches teleconference, Beaty said, “We got tough kids. They understand the task at hand and what we’re trying to get done. There’s zero spirit problem with the guys in the locker room.”

That’s good news (or just coach speak). But in the end, if one side of the ball is consistently carrying the other side, it doesn’t bode well for locker room cohesion or results (just ask Texas Tech).

Just a few weeks ago, I was heavily in favor of letting Ryan Willis continue at quarterback as he was (possibly) the future of the program at the position, while Montell Cozart was as senior who would be gone after this season. But, in Willis’ sophomore campaign he was just too turnover prone, throwing 6 interceptions over two games against TCU and Baylor. You talk about killing the morale of a team, that will do it. So, I understand the move away from Willis, and while Cozart has been better and serviceable, I would still look elsewhere at this point.

If I’m coach Beaty, I’m taking a look at other options including Carter Stanley, the redshirt freshman from Florida, TCU transfer Keaton Perry, or Dodge City JUCO transfer Deondre Ford, who did get some playing time in 2015 before a season-ending injury. It’s time to find out if the quarterback of the future is on this roster. Willis had plenty of time to prove it and he didn’t. Heck, maybe it’s true freshman Tyriek Starks, a three-star player from Louisiana.

All I know is, any of these options are worthwhile to consider. The offensive line has held up well, Ke’aun Kinner is a solid running back, and there is talent outside led by WR LaQuvionte Gonzalez. It’s time to figure out who is the answer under center. Is he even on the roster? Well, there’s only one way to find out.