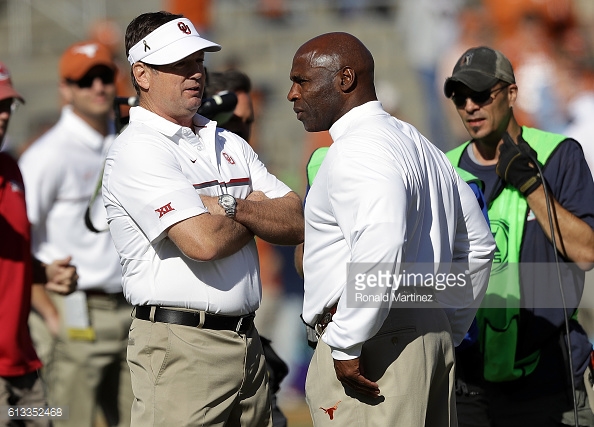 Thanks to USA Today, the latest on coaching salaries in college football was released.

Oklahoma’s Bob Stoops is the highest paid coach in the Big 12 at $5.5 million, which also puts him at 4th in the country. Texas’ Charlie Strong is the only other Big 12 coach ranked in the top 15, coming in at #6 with a salary of $5.2 million.

Then there is a drop off. Iowa State’s Matt Campbell is ranked 56th with a $2 million salary, while KU’s David Beaty comes in at 84th with a salary under $1 million ($801,000). Then, there’s Baylor’s Jim Grobe, whose salary is not listed, likely because of the unique situation involving his hiring.

So, some interesting notes:

The Big 12 has two of the top ten highest paid coaches in the nation. The Big Ten has three (Harbaugh, Meyer, Ferentz). The SEC leads the way with four.

So, the long and short is that the Big 12 is certainly in a good place when it comes to competitive salaries. As a percentage, the Big 12 is 2nd in the nation with number of coaches in the top 25 of salaries.

Here’s another fun tidbit. If you are considering a career change, now might be the time! The first $4 million head coach was Nick Saban in 2007. Now there are 20 coaches in the nation making that much money. Amazing!