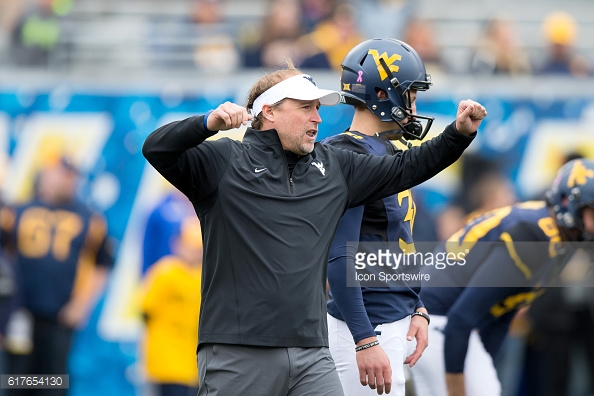 The Big 12 officially became irrelevant to the rest of the college football world yesterday. First, with a noon eastern kick off, the 10th ranked West Virginia Mountaineers went into Stillwater and trailed from the 2nd quarter on, losing to Oklahoma State 37-20. Then, about four hours later, Trent Dominque put a 39-yard field goal through the uprights to give Texas a 35-34 upset over #6 Baylor. Just when Big 12 fans were starting to get excited at the prospect of two teams getting into the college football playoff picture, they had their hearts ripped out.

Some fans may argue there is great parity in the Big 12. I agree, there is. But, I spend most of my Saturdays watching college football, and I can’t make a legitimate argument that based on what I see, the Big 12 has one of the best four teams in the country. Frankly, I don’t think anyone can.

The wild card is the Oklahoma Sooners. OU is still undefeated in Big 12 play, and may very well finish the conference slate at 9-0. But, there is the 1-2 record in non-conference action. That will come back to haunt them. Their loss to Ohio State is not a bad one, but that will have been the best team they played all season, and the game was not competitive. The Houston loss is even more questionable and disappointing considering the Cougars’ recent losses to Navy and SMU. Sure, you can look at that OU-Houston game as a situation where the Cougars prepped for it like their Super Bowl and the Sooners maybe took the game for granted. But, a loss is a loss. It’s now part of OU’s resume and there are no excuses. That’s the beauty of college football, every game counts.

The Big 12 certainly can still be a fun race to the finish line. Oklahoma, West Virginia, Baylor, and Oklahoma State can all win the conference. The second tier of Kansas State, Texas, Texas Tech and TCU can play with just about anyone in the Big 12. But, will anyone care outside of Texas, Oklahoma, Kansas, Iowa and West Virginia? Probably not.

Attention will now turn to the weekly College Football Playoff rankings where it will be all about the top 4. The Big 12 may not have anyone in the Top 10 in this week’s rankings. Baylor should drop quite a few spots, especially since its schedule to date was especially soft. West Virginia is likely to fall 5-7 spots. Oklahoma may move up 2-4 spots, but unlikely 5 or more, considering the team they demolished has won two Big 12 games since the disaster that is Obamacare was signed into law (2010).

The Big 12 has always been a fascinating daytime soap opera-like drama. But, with expansion officially dead, and no chances of an appearance in the College Football Playoff, the Big 12 now becomes about simply winning a conference title. The Big 12 is healthy and will be fine moving forward. This just isn’t the year.

Yes, there’s plenty to be proud of for whoever wins, but as Big 12 fans we just aren’t used to such anticlimactic finishes to a season. Then again, maybe that’s OK, kind of like a breath of fresh air.