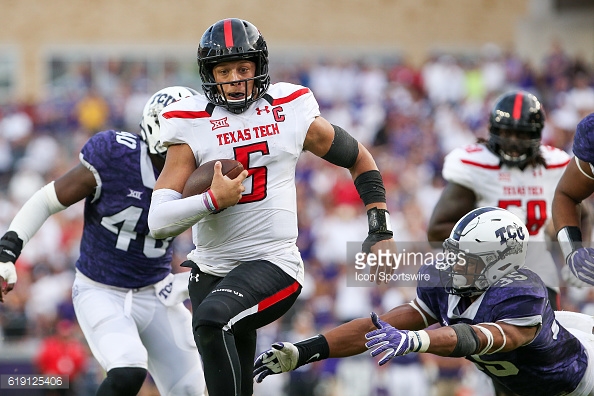 On Saturday, Mahomes threw for 206 yards and two touchdowns and rushed for a touchdown in a Texas Tech overtime win against TCU. But it was his father who, unfortunately, stole some of the headlines.

According to a police report, Mahomes was taken into custody at Amon Carter Stadium at 5:45 p.m. It appears like the 46-year-old made his way into the TCU student section and got into it with another fan.

Patrick Mahomes dad came by us in the student section to watch and talk to Mahomes, and they kicked him out because a student made a scene.

Another man, Jonathan Gormly, 26, was also arrested on a public intoxication charge during the incident, according to the police report. At this point, it’s not clear if Gormly is the man Mahomes got into an altercation with.

Both men had been released from jail by Sunday morning.

Mahomes pitched in the big leagues for 11 seasons, playing for the Twins, Red Sox, Mets, Rangers, Cubs and Pirates. Mahomes was a gentleman and a class act when we interviewed him last April. So, hopefully this was just a misunderstanding and a small bump in the road.