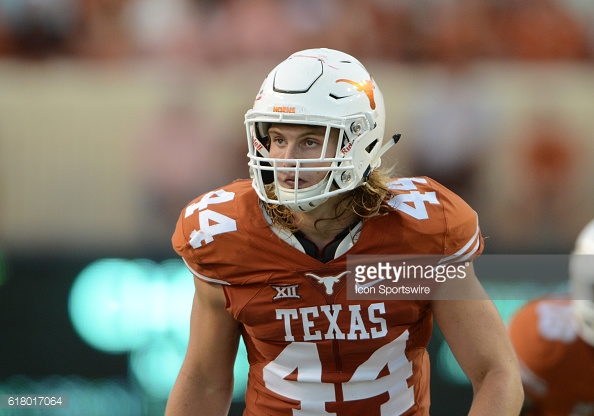 During the Longhorns media session on Monday, linebacker Breckyn Hager had an interesting take on how to stop Texas Tech QB Patrick Mahomes, saying multiple times they want to, “injure that quarterback.”

Here is the video as well:

‘That’s the mentality. We’ve got to take him out.’ pic.twitter.com/1gfvXfcNbW

Now, Mahomes has not been healthy the past few weeks. He’s listed as day-to-day with shoulder injury he aggravated in the win against the Horned Frogs on Saturday.

Are you kidding meRT @RickyDoyle: Hager on the Texas D’s mission this week: “Injure that quarterback.”

To add to this story, the elder Mahomes had his own set of issues over the weekend when he was arrested for public intoxication.

Regardless, the comments for Hager are ridiculous and irresponsible. It’s not the first time he’s come out and made dumb comments. After Texas beat Iowa State earlier this month, Hager said the team was going undefeated the rest of the season. Well, UT went out and lost to Kansas State the following week. How do we sum up this tool in the best way possible? Here you go:

Who is this Breckyn Hager anyway and how much do his parents have to hate him to give him a name like Breckyn?

Hager has since issued an apology for his “poor choice of words”.