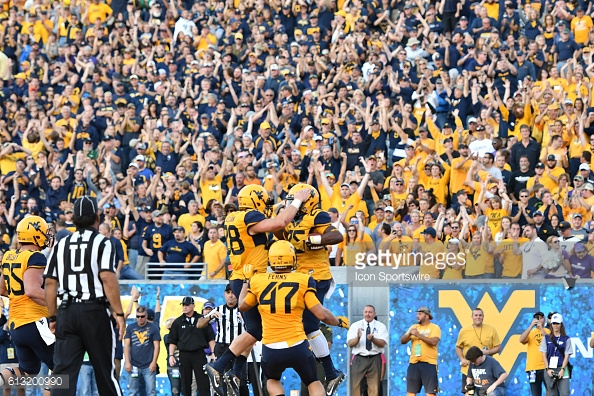 Halloween weekend was more tricks than treats for the Big 12’s elite, as their top two teams in Baylor and West Virginia both lost on Saturday. Baylor fell to Charlie Strong’s Longhorns on a last-second field goal, while the Mountaineers were ousted by Oklahoma State in Stillwater.

Leading up to the weekend, everyone in Big 12 country was excited; two teams were undefeated. And for a conference without a championship game, winning every game is the ultimate goal. Teams in the SEC or the Big 10 can overcome an early loss (Ohio State lost to Penn State last weekend) and still fight their way back into the playoff picture because of that 13th data point – a conference championship.

WVU (6-1) and Baylor (6-1) are slated for a matchup in the final weekend of the regular season, which would’ve been the most-hyped game in the Big 12 in a long time – if and only if both teams were still undefeated. With each team losing, the Oklahoma Sooners (6-2) are somehow back into the picture, in spite of a blowout loss at the hands of Ohio State and a loss to a Houston team that’s gone 2-2 over its last four games.

So are there any real contenders in the Big 12? Or just pretenders?

Baylor never seemed like a real contender to me. Look to their non-conference schedule for the reasons why; home against Northwestern State (a 55-7 W), home against SMU (a 40-13 W) and at Rice (a 38-10 W). Do you even know where those schools are located? I understand the scheduling of college athletics, and most of these games were agreed upon years ago, but that doesn’t mean we should give them a pass while other teams schedule opponents that put up a fight.

Oklahoma for example, started off at Houston and played against the Buckeyes in Norman. Nobody really expected Houston to burst onto the scene like they did (Tom Herman has done an excellent coaching job), but they came out and smacked the Sooners in the mouth without much pushback. Of course, Oklahoma needed a cupcake sandwiched between their two tough non-conference games; enter the Louisiana-Monroe Warhawks. Could you imagine how hot Bob Stoops’ seat would’ve been had they started 0-3? I’m going to rattle off a few numbers, and you decide if this team could compete against college football’s elite: 33, 46, 40, 59. Those are some point totals that the Sooners have given up this year. Could they even stop a nose bleed?

Now we get to the actual best team in the Big 12. It may not be a sexy pick, but it should be an obvious one – the West Virginia Mountaineers.

Losing to Oklahoma State looks ugly on the surface, but the Cowboys are no slouch. If it weren’t for some incompetent officials in their matchup against Central Michigan, Oklahoma State would’ve only suffered one loss. But, you read who they played: Central Michigan. They also had non-conference games against Southeastern Louisiana and Pitt. The Mountaineers opened their season against Missouri, a team in the big, bad SEC. Following that win, they played Youngstown State, a program Jim Tressel has had a huge hand in building, and then a week later against a Brigham Young team that was hoping to become a member of the Big 12. It’s not just about their schedule, either though; this team can win multiple ways.

In their first conference game, the Kansas State Wildcats showed up in Morgantown with the best defense in the country. This bothered the Eers for the first three quarters of the game where they only managed a field goal, but when winning time arrived, so did the West Virginia offense. 14 points in the 4th and a defensive stop sealed it, giving WVU the win. As the team traveled to Lubbock for their next game, Patrick Mahomes and his number two ranked offense were waiting for the Mountaineers. Texas Tech, who could only muster up 17 points, was averaging 55 points a game until they ran into the buzz saw that was the Mountaineer defense. Oh, and the West Virginia offense? They scored 48 that week, so don’t worry about this team being able to put up points.

For a team that graduated 20 seniors last year and lost key players to injury early this season, Dana Holgorsen and the West Virginia Mountaineers should be getting a lot more respect than they are. Luckily, they’ll get to showcase their talents against Texas, Oklahoma and Baylor in the coming weeks.

Lookout Big 12 – the Mountaineers are just getting warmed up!