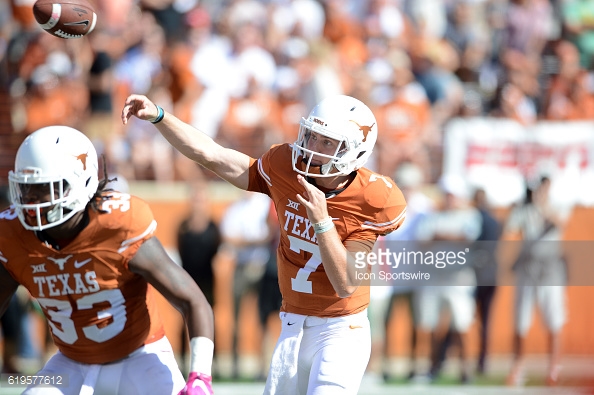 As we hit the home stretch of the 2016 season, I figured it’d be a good time to take a look at some of the breakout freshmen across the Big 12. Some of these guys are names we expected would be on this list before the season started, others were names that no one really saw coming. Either way, here are five top players we’ll have the pleasure of watching for at least the next two seasons.

Honorable Mention: Kennedy McKoy, running back, West Virginia: While he’s been really good as of late, he just doesn’t have enough carries for me to justify putting him in the top 5 at this point.

5) Jordyn Brooks, linebacker, Texas Tech: In what has been another brutal season for the Red Raiders defense, Brooks has been one of the lone bright spots. He has improved throughout conference play with at least 6 tackles over his past four games. He was second in the team with 10 tackles in the overtime win against TCU last week. For the season, he has 53 tackles, which ranks 12th in the Big 12, and is the highest ranking of any freshman in the conference.

Rather than going with a mediocre, more veteran player at the spot, Tech has gone young at the middle linebacker spot, which should really start paying off as Brooks and some of the other young pieces progress through the program.

4) Taj Williams, wide receiver, TCU: Williams is in the top 10 in the Big 12 in receiving yards per game with 74.1. His 11 catches in the opener against South Dakota State is the second most catches of any other in the conference in a game this season. Williams’ most explosive game came against Oklahoma, where he had five catches for 210 yards and two touchdowns.

Granted, his pace has slowed down in recent weeks, but, he did leave the West Virginia game with a leg injury, before returning. With Kavontae Turpin missing a lot of time over the first two months, Williams was one of a couple players to step up in his absence. There are certainly some issues at QB that need to be figured out at TCU, but with Williams on the outside, the wide receiver position remains a positive for the Horned Frogs.

3) Reggie Walker, defensive end, Kansas State: Walker has been one of the great surprises in the conference this season. The three-star linebacker from Louisiana chose Kansas State over Florida, Miami, Arkansas and others, and so far the decision is paying off nicely for both sides. Walker is playing defensive end for Bill Snyder and has helped K-State become the best defense in the Big 12.

Walker has 3 sacks this season and 6 tackles for loss, both ranked in the top 15 in the Big 12. His two forced fumbles are tied for fourth in the Big 12. Also, his production has not slowed down one bit since conference play started. Two of his sacks came in Big 12 play against Texas and Texas Tech. His job has been made easier likely because of the offensive line’s focus on fellow defensive end Jordan Willis, but that should not take away from what is becoming an outstanding freshman campaign for Walker.

The only real mistake by Walker this season is when he called Oklahoma running back Joe Mixon “pretty easy to tackle”. Bad move there, Reggie.

2) Justice Hill, running back, Oklahoma State: Hill entered the summer as the “other” new running back in Stillwater behind transfer Barry Sanders Jr. But, it’s been the freshman who has stolen the headlines and given life back to a Cowboy running game that has been dormant for a couple seasons.

Considering all the names that were being discussed as Oklahoma State running backs before the season, from Sanders Jr., to Chris Carson, Rennie Childs, and Jeff Carr, it’s the freshman who has taken the job from all of them.

1) Shane Buechele, quarterback, Texas: The Longhorns have waited nearly a decade to find a competent replacement for Colt McCoy. Well, they finally have him. While Texas hasn’t lived up to expectations put on the team following its win over Notre Dame in Week 1, there’s no doubt who the quarterback of the program is for at least the next two seasons.

Buechele is averaging over 250 passing yards per game and has adapted incredibly well to Sterlin Gilbert’s system. Granted, the system was similar to what he ran in high school, but it’s still very impressive for a true freshman.

In terms of passing efficiency, Buechele ranks 4th in the Big 12 behind studs like Mayfield, Mahomes, and Rudolph.

Maybe the most impressive part of Buechele’s game has been his limiting of mistakes. Through 8 games this season, Buechele has never thrown more than 1 interception. To keep his errors to such as minimum as a true freshman is a testament to his ability as well as the play-calling by Gilbert.

Are the Mountaineers still the Big 12’s best?
Big 12 college football picks against the spread: Week 10
To Top