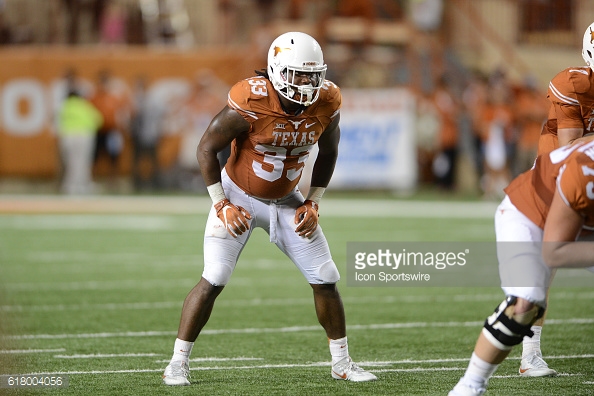 As expected, the Longhorns had their way on the ground Saturday against Texas Tech, holding off the Red Raiders for a 45-37 victory. It was the Longhorns’ first road win this season and another win for Charlie Strong to try and save his job. But, it was Texas running back D’Onta Foreman who continues to steal the show.

Foreman rushed for a career-high 341 yards and 3 touchdowns on 33 carries, averaging a ridiculous 10.3 yards per carry. But, not only that, he nearly did something that hasn’t been done in 18 years.

When I saw that fact, I realized it is finally time to put Foreman in the Heisman discussion. He is the most overlooked college football player in America today. Foreman currently ranks fifth in the FBS with his 1,105 rushing yards. But, he has the most of any player in a Power 5 conference.

The players in front of him are Donnel Pumphrey (San Diego State), Jeremy McNichols (Boise State), Brian Hill (Wyoming), and James Gilbert (Ball State). Right behind Foreman is Florida State running back Dalvin Cook who was discussed before the season as a Heisman favorite and remains in the discussion.

Foreman’s lowest rushing output is 124 yards three weeks ago against Kansas State, who is ranked 7th in the nation in rushing yards allowed per game. He has rushed for 100+ yards in each of his last 10 games, the longest active FBS streak. We could go on and on about how impressive Foreman has been, and even his head coach Charlie Strong said after the Texas Tech win, “It’s gotta be an A+ [day]. As good as I’ve seen.”

Now, the reality is this when it comes to the Heisman Trophy this season: it’s Louisville QB Lamar Jackson … and everyone else.

Each week at Sports Illustrated (one of my “day jobs”), we put together a list of Heisman rankings 1 through 5. There is no doubt that Jackson is number 1, and he will remain number 1 after scoring 7 more touchdowns against Boston College on Saturday.

But, when going 2 through 5, names like Jake Browning, Jabrill Peppers, Deshaun Watson and Baker Mayfield make the list. All have had fantastic seasons, but after Saturday’s game against Texas Tech, Foreman should be right in the discussion with those players.

Not only that, but imagine the year Foreman would be having if Chris Warren III wasn’t playing the first 5 weeks of the season. Warren suffered a knee injury Week 5 against Oklahoma State. While I hope for Warren to have a full recovery, his absence has allowed Foreman to shine and show he is the best running back in America.

If you’re a Longhorns fan and you want the bad news… Foreman won’t be back in 2017. I don’t see any way he returns for a senior season. Foreman is not even 21 years old, so leaving for the NFL Draft in 2017 would allow him to maximize his earning potential in the NFL where running backs are now considered “washed up” by their late-20’s.

So, while Foreman is unlikely to leave a legacy such as a Big 12 Championship, there is one legacy he can help leave: earning Charlie Strong another year as head coach in Austin. Texas is now 5-4 overall, and 3-3 in Big 12 play. With Kansas still on the schedule, the Longhorns will be bowl eligible. But, if Foreman can lead to Texas to a 3-0 finish, which would include an upset at #20 West Virginia, then Strong may have a chance to return. And while it’s not the kind of record or legacy that shows up in the record books, it would mean a lot of many folks around the Texas Longhorns program.