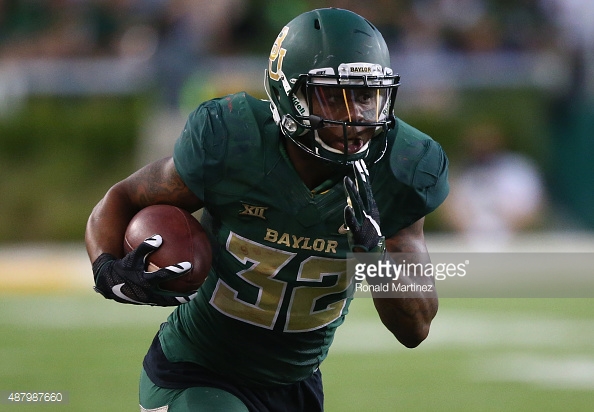 If the Baylor Bears are going to pull off the upset against the Oklahoma Sooners on Saturday afternoon, they’ll have to do it without star running back Shock Linwood.

Interim head coach Jim Grobe said during Monday’s press conference that Linwood has been suspended for Saturday’s game against OU because of “attitude issues” the running back needs to work through. It’s been reported, and we also recently heard, that Linwood shoved an assistant coach on Saturday.

Grobe added about Linwood,”He just hasn’t been himself and I want to help him.”

After rushing for over 1,000 yards during his sophomore and junior seasons, Linwood’s senior season has not lived up to the hype, except for one week. On October 1st, Linwood rushed for 237 yards against Iowa State, averaging a ridiculous 9.5 yards per carry. But, that day is almost half of his output for the season. He has 100 carries for 594 yards and two touchdowns.

Over the past two seasons Linwood racked up 26 rushing touchdowns for the Bears.

And with the Bears getting set to face the Sooners in Norman, the loss stings even more. Linwood had owned the Sooners in previous match ups, averaging 124 rushing yards per game in his 3 games against OU. This is just the latest in a string of a rough few days for Baylor football, capped off with a 40-point loss to TCU on Saturday.

Without Linwood, expect to see more of redshirt freshman JaMycal Hasty, who has 64 carries for 359 yards this season. Terence Williams, the team’s top rusher, has rushed for 691 yards and 8 touchdowns this season.