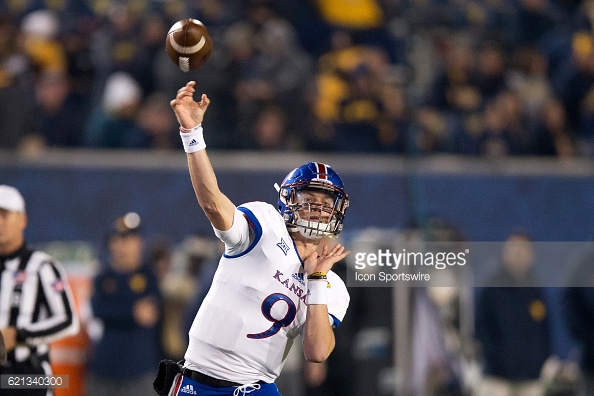 When you’ve lost 40 straight road games, you need to find positives in the little things. But, on Saturday against West Virginia, redshirt freshman Carter Stanley was one of those positives, but it isn’t just a “little thing”. Stanley proved he is worthy of seeing many more snaps over the season’s final three games.

After starter Montell Cozart showed concussion-like symptoms, Jayhawks head coach David Beaty inserted Stanely with 5:38 to go in the third quarter. Stanley was able to lead his team to a touchdown in under three minutes. Stanley finished his night 9 of 11 through the air for 127 yards with 2 touchdowns and 1 interception as the Jayhawks lost to the West Virginia Mountaineers 48-21. Also, Stanley was effective on the ground, adding 4 carries for 24 yards.

With the loss, Kansas fell to 1-8 on the season and 0-6 in Big 12 play, and clearly remains the worst team in the conference. So, what better time to figure out what exactly this team has in Stanley? We’ve discussed before how Montell Cozart is a loyal trooper, but as a senior, he is not part of the future in Lawrence.

After the game, Beaty said about Stanley, “I wanted to see him in some meaningful minutes.”

Well, Beaty should stick to those words and commit to seeing even more meaningful minutes from Stanley over these next three games against Iowa State, Texas and Kansas State.

Tom Keegan of KUSports.com suggested the Jayhawks look the graduate transfer or junior college route. Tom is a fantastic writer and a guy I have followed since he was doing radio in New York City, but my thinking on this one is we’ve already seen that script play out with Charlie Weis and Turner Gill. It gets the fan base excited, but it has not worked lately in Lawrence.

Stanley was a two-star prospect coming out of Florida. During his senior season, he threw for 3,070 yards, 40 touchdowns and just seven interceptions for Vero Beach, and also ran for close to 600 yards and seven touchdowns. When he decided on Kansas, one of the main reasons was the playbook, saying, “They are running the same type of offense that I did at our high school. I was excited when it happened.”

So, after getting two seasons to learn a playbook that was similar to the one he used in high school, it’s time to spend the next 3 games seeing if Stanley can translate that knowledge and be the spark plug to help Kansas get back to respectability. Mason Rudolph famously did just that for Oklahoma State towards the end of the 2014 season when he was thrown into the fire as a freshman.

And not to anoint Stanley as the next Tom Brady, but if you recall, it was Stanley, who with the Jayhawks trailing 49-0 in the third quarter at Baylor a couple weeks ago, entered the game and led KU to its first touchdown of the game. Now, Stanley did miss some throws and toss an interception, which did not please coach Beaty after that game, saying,“There were still a lot of things that we saw that we need to get a lot better at. Particularly the pick. Just eyes in the right spot, understanding what coverages are doing to you, not picking a route out, that will get you in trouble.”

That’s understandable. But, the season is long over. Maybe the Jayhawks have a slight chance against Iowa State this weekend if everything breaks right. That chance might increase slightly with Cozart at quarterback. Unfortunately, that would just postpone potential long-term gains for a very short-term gain.

Montell Cozart is obviously not the quarterback of the future because, well, as a senior, he can’t be. Ryan Willis has been given ample opportunities, but turned the ball over far too much (although, I’m not quite ready to quit on him just yet). We don’t know if Carter Stanley is, or can be, the future for the Jayhawks under center. But, guess what? There’s only one way to find out. Play the kid and see what he’s got.

Iowa State two-QB system a disservice to Park and Lanning
Is this 2016 Texas Tech defense the worst defense in Big 12 history?
To Top