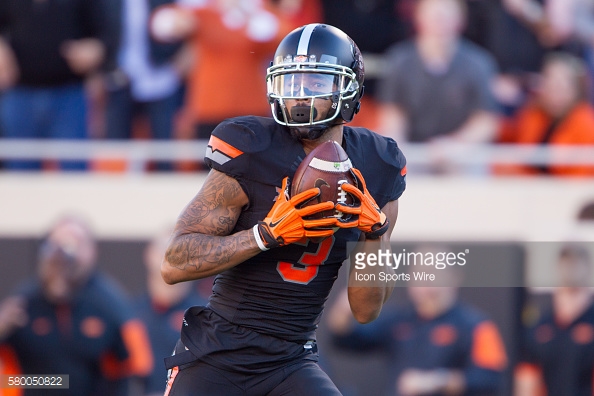 Over the summer, Oklahoma State announced that wide receiver Marcell Ateman would undergo foot surgery and return later in the season. But on Monday, head coach Mike Gundy announced Ateman will redshirt this season and return for a senior year in 2017.

Ateman caught 45 passes for 766 yards and 5 touchdowns in 2015, and is poised to give Oklahoma State another great weapon on the outside for 2017.

According to Gundy, Ateman could have returned later this month against TCU, but both sides agreed it was not worth burning a season for potentially only playing in 2 or 3 games.

Gundy said during Monday’s press conference, “I don’t think the number of games that he could play at full speed compared to the future he has in this game is worth it. Because if he comes back for one game, you would think that he’s probably not going to play full speed. Mentally, he’s just not going to be there. So maybe two games (OU + bowl game).”

With Ateman back in the mix, and potentially WR James Washington and QB Mason Rudolph returning for their senior seasons, along with an improving offensive line, Oklahoma State will be in a great position heading into the 2017 season. I hate to jump ahead like that as OSU still has plenty to play for this season, but it still is an exciting proposition. Of course, Washington and Rudolph could both decide to head to the NFL Draft, but that has not yet been determined.

Regarding Ateman and the NFL, Gundy believed the wide receiver could use another season of preparation in Stillwater, saying, “Those guys, again, I go back to, just watch the game in the NFL level and watch those guys play. You need all the training in college you can get in most cases. You need all the strength and conditioning, the maturity, the years that you can get. These guys that don’t redshirt, they’re just, in my opinion, they’re taking a real risk in getting out there and playing against those guys.”

Smart move by Ateman to come back and not be wooed by NFL money. At this point he’d be a mid, or late-round pick, at best. He’s better off getting healthy and honing his craft for another season. Exciting times in Stillwater.