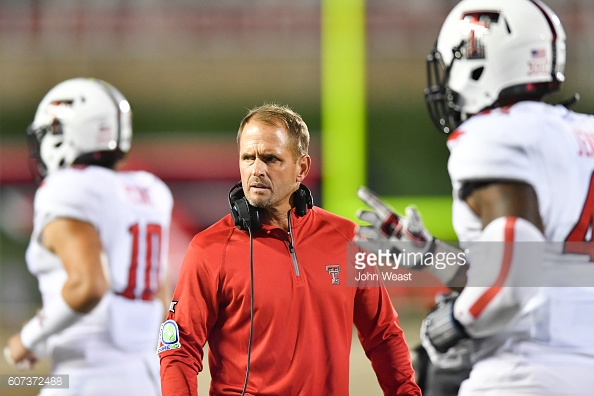 With the Red Raiders sitting at 4-5 overall and 2-4 in Big 12 play, Texas Tech is the most disappointing team in the conference this season. Texas Tech lost to Texas 45-37 on Saturday and allowed D’Onta Foreman to rush for an absurd 341 yards. The Red Raiders gave up 658 total yards, the Longhorns’ sixth-highest output all-time. The biggest issue hampering this Tech team is the same issue it’s been during Kliff Kingsbury’s tenure in Lubbock: the defense. It’s flat out terrible.

How bad you ask?

I went back through every year in the Big 12 to see where this Texas Tech defense ranks in terms of worst defenses in Big 12 history. I decided to use the easiest metric to understand: total yards allowed per game.

Since Big 12 realignment in 2011, there has only been 1 defense that ended up worse than Texas Tech’s current pace of 534 yards allowed per game and that was Kansas last season which allowed 561 yards per game. Ironically, Texas Tech’s defense was actually worse last season than it is this season (so far), as they finished the season allowing 547 yards per game.

As we go year by year before conference realignment, the worst defenses in the conference were as follows:

As expected, the defenses have allowed more yards in recent seasons as the spread offenses have continued to gain popularity. So, as things currently stand, this 2016 Texas Tech defense would mark as the third worst defense in Big 12 history behind themselves and Kansas, both last season.

But, there are still three games remaining for the Red Raiders against Oklahoma State, Iowa State, and Baylor.

We crunched the numbers and for the Red Raiders to become the worst defense in Big 12 history and top last year’s Kansas team they would need to allow an average of 646 total yards per game over their final 3 contests. Even with two really solid offenses left, this seems highly unlikely, especially with Iowa State on the schedule. Oklahoma State and Iowa State are ranked 7th and 8th respectively in total offense in the Big 12, while Baylor, who has played the softest part of its schedule to date, has the 3rd ranked offense in the country. But, as we saw against TCU on Saturday, the Bears may be coming apart at the seams.

So, it’s fair to say that this Texas Tech defense will not go down as the worst defense in Big 12 history, but it’s likely to be right in the top 3. Can Kliff Kingsbury and David Gibbs ever get this thing turned around? More importantly, will they continue to be given the time to turn things around?