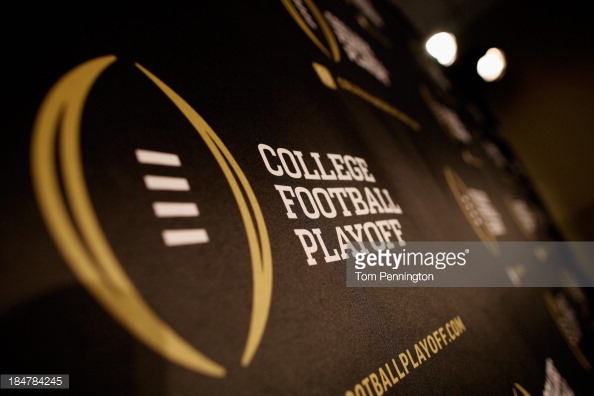 The most bizarre and strangest election in the history of this country is over… overall, good news! We can all now move on and keep talking about Big 12 sports.

Anyway, I was messing around on Nate Silver’s FiveThirtyEight website this morning. I wanted to see what was on the site after the horrendous job he did in predictions during the primaries and the general election last night. But, he does carry sway in the industry and his credibility is not completely shot by any means. His build up to fame came during the 2008 election when he accurately predicted 49 of the 50 states. In 2012, he was able to accurately predict all 50 states.

But, some of the magic of Silver’s predictions have worn off during this election season. Either way, he’s a very well-regarded statistician and still has a ton of credibility.

I decided to go to the College Football Playoff predictor on the website and see where FiveThirtyEight thought things stood for the Big 12 conference.

The three Big 12 teams in the race go as follows:

One of the fun things with this predictor is you can see how the odds change based on if one of these three teams win out. Here how those numbers stand:

Now, maybe, if you’re a big fan of the Sooners, Mountaineers or Cowboys you think, “Alright, those odds aren’t bad! We just have to win out to have a real shot!”

Well, when you break down the odds of these three teams actually winning the rest of the games on there schedule, here’s what those numbers look like:

So, as I have discussed over the past couple of weeks, the Big 12’s chances of making the College Football Playoff are slim to none. That being said, this is the same outlet that gave Donald Trump very little chance to win the Presidency before the votes started rolling in last night.

Except, there is a big difference: there is a clear black and white outcome for each team ranked in the top 15 and how things need to play out for the Big 12.

I played around with the statistics machine and found a way to increase the Sooners chances of making the playoff (or anyone in the Big 12). IF Washington loses to USC on Saturday and Oklahoma wins out, their odds go from 28% chance to make the playoff, up to 34%. West Virginia gets a bump of 7 points from 25% to 32% chance, and Oklahoma State moves from 21 to 26%.

This gets into something most of us already know: For the Big 12 to have any legitimate shot, they need the Pac-12 to blow itself up. The Pac-12 is not a respected conference and is rated as the lowest of the Power 5 conferences (the Big 12 is 4th).

At this point, Clemson’s path to an undefeated season is the easiest (Pitt, Wake Forest, South Carolina, ACC Title). Then, there’s the SEC and the Big Ten, who could have some chaos down the home stretch, but are still very, very likely to each find a team ranked in the Final 4 when the season comes to an end.

Also a problem for the Big 12 are the teams in front of OU, WVU and OSU.

The odds for each of the Big 12 schools decrease (even if they win out), if the teams in front of them like Ohio State, Louisville, Auburn, and Wisconsin also win out. So, even Louisville, who basically has zero shot of making the ACC title game (barring a Clemson collapse losing 2 of the next 3, combined with Louisville winning out), has better odds of making the College Football Playoff as an at-large team than the Sooners do as a conference champion.

If Oklahoma wins out and Louisville wins out, OU’s chances of making the playoff go from 28% down to 25%.

It’s a really tough spot for all these Big 12 teams to be in.