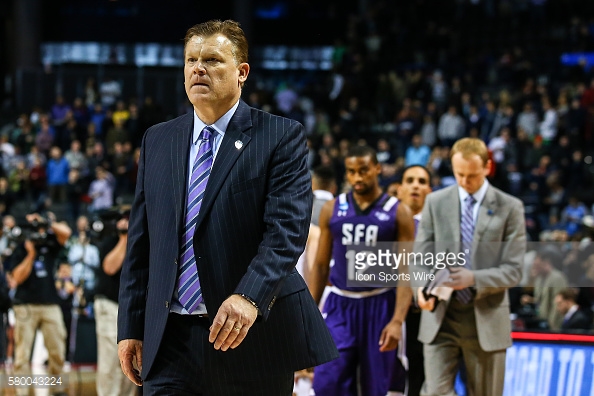 One of our contributors, Ryan Stone, hosts a radio show at my former employer, K101/Z92 radio in Woodward, Oklahoma. Ryan and his co-hosts Sean Gallagher and Stephen McTeer interviewed new Oklahoma State head coach Brad Underwood. Here is the Q&A!

How have the past few months gone for you and this team since you were named the Head Coach?

Well they’ve gone pretty quick to be honest, seems like just yesterday I was in there for a press conference and now we’re walking out there for a game. It’s been awesome, I’ve had a lot of fun getting to know the OSU family, getting to know some of the alums and getting to travel the state that’s been very enjoyable. I think our team has gotten better every day, we’ve got a lot of challenges and we’ve got to continue to get better every day.

It’s obviously your first year at Oklahoma State, how well do you think this team has adapted to your style of play?

I think they’ve been very committed, I think they’ve had both feet in. I think what everybody has to understand and you can think about this in your own personal life, breaking habits is hard and we’re trying to break some habits and form new habits. That’s not something that is done on a daily basis; it just doesn’t happen that quickly. We’re working, the kids are working their tails off, and that’s what has been great. The technical and fundamental things we’ll continue to work to get better at every single day. I’ve loved our effort, we want to be the hardest playing team in the country and we’ve got a ways to go to strive towards that. Our chemistry is great, the guys in the locker room are pulling for each other and as long we’ve got that we’ve got a chance to continue to grow.

What do you think of your current roster?

Well I like them. I think anytime you’ve got a fifth year senior in Phil, you’ve got a guy in Leyton Hammonds who’s produced, you’ve got Mitchell Solomon who’s got a lot of starts under his belt and then you’ve got freshmen who don’t know and those veterans are leading those guys. We’re looking for continued consistency from Tavarius Shine and Jeff Carroll. All of those guys have shown improvement. I like our roster I think we’re a team that has the ability to do some things at both ends of the court that can be special and yet it’s about chemistry and it’s about togetherness and toughness and we’re working at those things every day.

Did you take anything from your exhibition with Pittsburg State that you’ll use in the opener against Campbell?

Well experience is invaluable and we through a lot of new guys out there that it was the first time they had played under the lights in that uniform and we did it against a very good team. It was a night that kind of steam-rolled we made some shots and got going. Kevin does a great job at Pitt State and they are going to be good before the year is over. The experience was valuable and probably most important to us. We play for the most part not all 40 minutes, but we played hard. We made a lot of mistakes and we’ve got a lot of areas to clean up and work on. It was a starting point and we’ve got to continue to grow from there.

Looking out your schedule you start out with three games in five days against Campbell, Central Arkansas and New Orleans then you go to the Maui Invitational to take on a loaded field starting with UConn, so how important are these first three games to get ready for Maui?

I think every game is important whether it’s at home or on the road. I think the challenge we face playing so many games so quickly we’ve got to be very careful not to lose the process and continue to work. What I mean by that is it’s easy to get in game prep mode where you focus on your opponent more than yourself and I’m trying to be very guarded heading into the Campbell game. We’ve got things that we still have to clean up and have things that we don’t have in yet. So we’ll continue to work up until that time. We head into Maui and have a great opponent in UConn, I haven’t looked much beyond that, obviously a tournament team and Kevin does a great job. They’re going to pose some different problems that we might not usually see. Amidah Brimah is a 6’11, 7 foot shot blocker, we probably won’t see that the first three games. Every game is unique. Central Arkansas is going to pose different problems than Campbell, who runs a Princeton style offense and Central Arkansas has one of the leading scorers in the country returning and UNO has a veteran team that is very tough defensively. So every team is unique and we don’t get too far ahead of ourselves the most important thing is that Oklahoma State keeps improving every day.

What does it take for a team to compete in the Big 12?

Good Players, I think this league has proven coaches and the thing that impresses me when you look at the coaches in this league it’s not that they’ve done it once they’ve done it year in and year out. You have the occasional down year, that happens, but I think the thing that’s so important is you have to have winning intangibles. You have to have the toughness, have to have the character; you have to have the leadership to truly have great years. You look at what Bill’s done at Kansas, he’s had great players, but his team is always one of the hardest playing teams. Bob at West Virginia is approaching 800 wins and his teams play so hard. You look at how do we get better and we’ve got to stay together, I keep bringing that up as a common theme with our players and we can’t be divided we have to play as one and we have to play hard. That gives us a chance every night. That’s the process we’re going to approach everyday with is trying to get better.

How has the process been trying to get this team to buy in to your tough, nitty, gritty style of play?

It’s an everyday process, it doesn’t happen overnight. It’s not natural for a lot of kids to do that and it’s hard work. Winning is really really hard and it’s doing the same things every day to become good at it and it becomes boring, but the really good teams do that. Whether it’s a defensive drill that you do every day that you eventually become good at, it takes hard work every single day and it doesn’t matter what the jersey on the front says. That was the one thing our Stephen F. Austin teams thrived on.  It didn’t matter who it was, I think we lost one maybe two games to teams below 50 in the RPI, which means we showed up and took care of business every single day. That’s something I was proud of because there is fight and there is grit and there’s toughness and pride. Those are habits that we are still trying to put forth with this group and we’re getting there. They’re working hard.

What would you consider a successful season in your first year at Oklahoma State and what has to happen for this team to achieve that?

Well I’m probably going to disappoint you with my answer because I don’t put numbers on things. It’s about a process, it’s about establishing the culture that we want, it’s helping each of these players individually get better and it’s about our team getting better. I can’t control the scoreboard most nights and I want the process to be about things that translate into real life like being responsible and accountable. If you do those things the scoreboard will take care of itself. I’m pretty simplistic, I don’t try to overcomplicate things or get too far ahead of myself. All I can do is try to control what we do today.