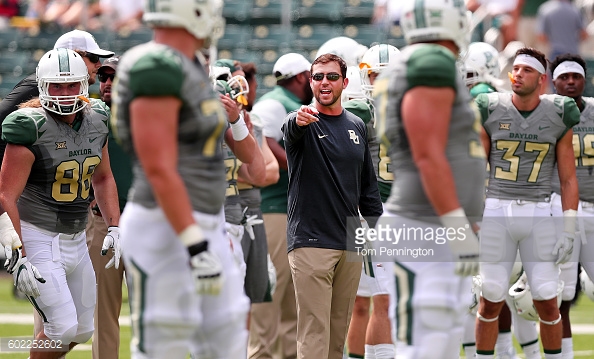 Baylor offensive coordinator Kendal Briles reportedly was in Indianapolis on Wednesday meeting with the NCAA about potential recruiting violations, according to ESPN.

According to the report, the NCAA says Briles had improper contact with a recruit. It’s unclear as to whether or not Briles and Baylor deny this happening, because ESPN says Baylor officials are attempting to get the level of infractions reduced. But, no details of the alleged infractions were known.

Now, one thing was made clear in the report that the NCAA investigation is not related to the school’s ongoing sexual assault scandal.

Unfortunately for Briles, this is not the first time he’s been in the NCAA’s cross hairs. In 2015, Briles was suspended one game by Baylor officials for a violation related to evaluations of prospective recruits. He ended up missing the season opener … against Lamar.

Briles is now in his second season as the offensive coordinator in Waco, but he’s been at Baylor since 2008, hired by his father and former head coach, Art Briles. ESPN reportedly reached out to Baylor athletics director Mack Rhoades for comment, but Rhoades did not respond to the text message. Granted that may just be a formality as NCAA rules prevent universities from commenting on ongoing investigations.