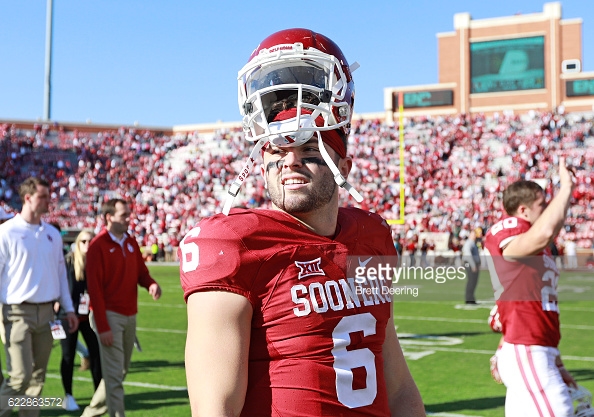 While Oklahoma QB Baker Mayfield can come back for the 2017 college football season, there are some thoughts that he could turn his attention to the 2017 NFL Draft.

Well, according to one NFL Draft analyst, that’s not a good idea. Matt Miller, the lead draft analyst at Bleacher Report, on Monday said Mayfield has plenty of work to do.

Because of his style and size (6’2”, 210 lbs), Mayfield continues to draw comparisons to Johnny Manziel, which fair or unfair, isn’t really the comparison you want right now if you aspire to play quarterback in the NFL.

At best, Mayfield is projected as a 3rd or 4th rounder in 2017, with many projections having him going undrafted if he were to declare for the upcoming draft. While Mayfield has produced at the college level, we know that his little to no affect on what a player does in the NFL.

Mayfield strength’s are his mental make up, confidence, and pocket mobility. But, he has issues with his accuracy, release, arm strength, and durability. Plus, he often relies on his pocket mobility far too often and bails out of his typical progressions. Of course, being in a spread-style offense rather than a pro-style doesn’t help his cause much either.

So, regardless, hopefully Mayfield stays in Norman in 2017. The Sooners could use it and he could use another season of honing his craft before taking his chances in the NFL.

What do you think? Will Baker Mayfield make a good NFL quarterback? Let us know in the comments!

West Virginia-Oklahoma game on ABC at 8 PM E.T.
Mike Stoops calls out Charles Walker for ‘quitting on teammates’
To Top