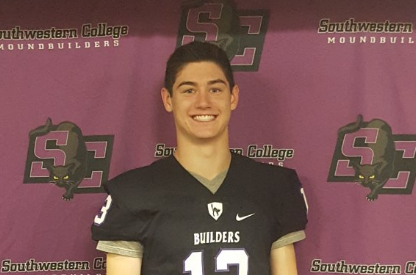 Nyc Burns addresses his decision to transfer from Oklahoma State to Southwestern College in Kansas.

Transfers happen all the time in college football. But, what is it like to make that decision as a walk-on? That is what Oklahoma State quarterback Nyc Burns decided on this week with his announcement he would be transferring to Southwestern College in Winfield, Kansas, part of the NAIA.

This was not a 5-star recruit who wasn’t getting playing time fast enough deciding to take his talents elsewhere. This was a young man who wants to pursue his dream of playing quarterback at the collegiate level, while not finding himself in two-decades worth of debt to do it. As we mentioned, while Burns was a quarterback for the Cowboys, he was a walk-on, meaning he was paying the tuition. So, when we had a chance to discuss this decision with Burns, he said a lot of his decision came down to money, telling HCS, “Well, coming out of high school I though student loans aren’t bad, I can pay them off, it won’t be a big deal. I started to wrap my head around this, and realize how much I was amassing in student loans. Then I started thinking about transferring, and it grew over time into deciding to do it!”

Burns reportedly had offers from Northwestern Oklahoma State, Arkansas Tech, Missouri Southern, among others. So, how did he choose the Moundbuilders? “I chose SC because it’s a chance to play immediately and because it will be awesome to be a part of the rebuild that Coach Griffin has started! I also loved all of the coaches at SC, they are some great guys!”

The quarterback will help try to turn around a Southwestern team that just finished a 1-9 season after going 3-8 in 2015, which was coach Brad Griffin’s first season in Winfield.

Burns had a great career at Berryhill High School in Tulsa, finishing his senior season with a 7-4 record, 2,860 yards passing yards with 35 touchdowns and 9 interceptions to go along with 706 rushing yards and 11 rushing touchdowns. He said there was plenty he enjoyed about his stint in Stillwater, especially spending time as the scout team quarterback, adding, “It was so much fun to compete every day with the defense! I love all of those guys, and it was always fun cracking helmets!”

Burns will certainly take plenty of positives away from his time in Stillwater, telling HCS, “There are absolutely ZERO regrets in my decision to go to Oklahoma State. I had a great time while I was here, but it just didn’t work out the way I would’ve wanted. I’m definitely grateful to have come here because it has done nothing but better me both as a player and a person! You just have to find what you want in life, and for me at this point and time, it was not Oklahoma State.”

All the best to Nyc Burns as he takes his talents north to the Sunflower State and tries to help turn around the Moundbuilders program!

Mike Gundy’s mullet isn’t going anywhere thanks to his son
What’s more thrilling than being an Oklahoma State fan?
To Top