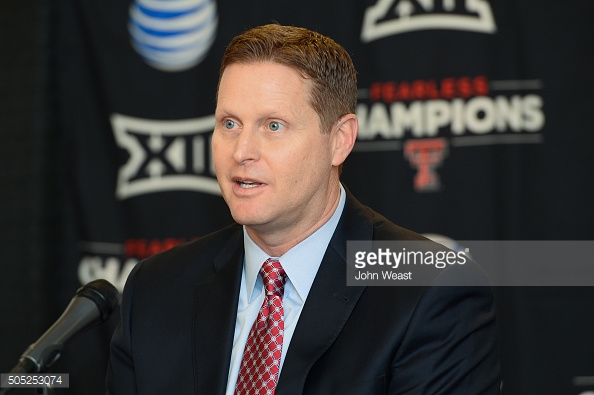 Let’s be honest, being the chair of the College Football Playoff committee is a thankless job. But, it’s one that Texas Tech AD Kirby Hocutt willingly accepted and should have known the criticism he’d receive going into it.

I can honestly say I haven’t watched a single CFB Playoff rankings show this season. There are no Big 12 teams close to the Top 4 and the entire thing is a made-for-television charade meant to create discussion and cause controversy.

Anyway, West Virginia fans were clearly upset with their team’s ranking on Tuesday night, coming in at #14, one behind 3-loss USC, and five spots behind 2-loss Oklahoma, who they play on Saturday night. Naturally, Hocutt was asked about the Mountaineers ranking following the latest poll, and here was his somewhat embarrassing answer.

So, Hocutt knocks the fact that the Mountaineers have played only one game against a current CFB playoff top-25 team and it was a loss to Oklahoma State. OK, fair enough. But, if you go down the list of some of the teams in front of WVU, #10 Colorado has two quality losses (Michigan, USC), while having 0 wins against a current top-25 team.  #12 Utah has two losses, one good (Washington), one bad (Cal), yet beat USC earlier in the season. But, isn’t the point of human error supposed to factor in here? This is a perfect example: do we give Utah credit for beating USC, who has played much better lately? Or do we realize USC is playing significantly better since switching from Max Browne at QB to Sam Darnold, and Darnold’s first serious game action this season was …? Yep, the game against Utah. Since his first game against the Utes, which naturally was a chance to get comfortable and get his feet wet, USC has not lost.

This all brings us to the Oklahoma Sooners. First, in the Q&A above, Hocutt got Oklahoma and Oklahoma State confused, thinking the Sooners beat the Mountaineers head-to-head. Hocutt proceeds to justify Oklahoma’s top-ten ranking by saying the Sooners have a good offense, have won seven straight and recovered from their two early season losses, while “still looking at West Virginia to get a quality win”.

OK, so … OU’s quality win is what exactly? Baylor? A TCU team that turned out to be overrated? There’s no answer here.

Miss the BCS yet? Here’s what’s happened (and if you need proof, just look at the latest Top 4 with Ohio State and Michigan), college football went from a computer-controlled formulaic system that had its flaws, to a human-controlled popularity contest to try and get the best ratings possible for the selection shows and the playoff games.

Oh, and I’m with Mike Gundy. I’d rather watch SpongeBob.

Mike Gundy on potentially politicking for a #CFP spot.
This dude really likes @SpongeBob. He really does not like Kirby Hocutt.#OKState pic.twitter.com/2aLXyUVSGp