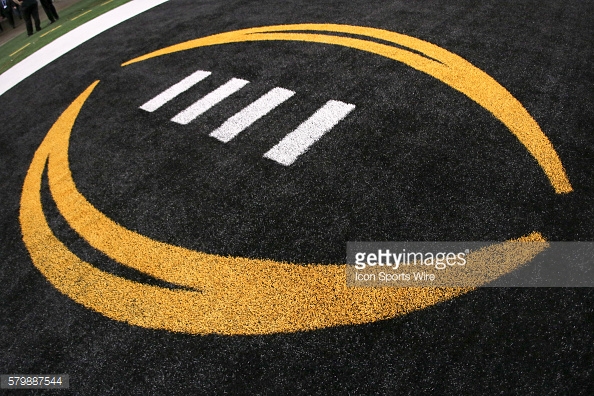 Two weeks now remain in the college football regular season and the question still looms, can a Big 12 team make it into the College Football Playoff?

Compared to last week this was a relatively tame week in college football. Among playoff contenders, only Louisville fell getting handled by Houston 36-10. That win by Houston does make that Oklahoma loss to Houston from Week 1 look a little better and also moves Louisville out of the Big 12 Champion’s way, making that path to the playoff a little clearer.

Another benefit for the Big 12 is that the Bedlam matchup on December 3, Championship Saturday, will serve as a de facto Big 12 Championship Game after both teams had statement wins on Saturday. Oklahoma State won at TCU 31-6 and Oklahoma won in prime time over on the road over number 14 West Virginia 56-28.

With that said, the Big 12 will still need some help to get into the College Football Playoff. Given that this was a tame week in the Top Ten coming off a chaotic week last week, the committee probably won’t make a lot of changes outside of dropping Louisville and sliding the teams that were behind the Cardinals up a spot, which would put both Oklahoma and Oklahoma State in the top ten. Still, this is good for both Oklahoma teams, as it strengthens both teams’ schedules.

Michigan at Ohio State is huge for the Big Ten, the playoff picture and also the Big 12. The Big 12 probably needs Ohio State to win. A second loss for the Buckeyes would drop them and also make it difficult for the Big 12 to jump over them, given how Oklahoma lost to Ohio State earlier in the year. An Ohio State win would also send Wisconsin and Penn State, both two-loss teams, to the Big Ten Championship Game eliminating the loser from the Playoff Picture.

Speaking of Penn State, don’t sleep on their game with Michigan State on Saturday. Penn State will be an obvious favorite, but Michigan State took Ohio State to the brink on Saturday and probably would have forced overtime, if not for a bizarre decision to go for a two-point conversion late in the game. Ultimately, Oklahoma and Oklahoma State fans should become Spartans fans this weekend. A loss for Penn State would move them out of the Big 12’s way whether it comes this week or next.

The final game for the week that Big 12 fans should keep an eye on is Utah at Colorado. The Buffs weren’t ahead of the Sooners this past week in the poll, but they were ahead of the Cowboys. A loss for Colorado would move the Buffs out of the way as well. Utah was ranked 12th last week, but was shocked by Oregon, who has just 4 wins this season.

So, to give you the cliff notes, here is what Oklahoma, Oklahoma State, and generic Big 12 fans need to know when you’re gorging on Thanksgiving leftovers: be thankful and root for Washington State, Ohio State, Michigan State and Utah. That is if you want the Big 12 in the College Football Playoff. If you’re not an Oklahoma or Oklahoma State fan, and don’t have any Big 12 Conference pride, then just keep gorging on the leftovers.