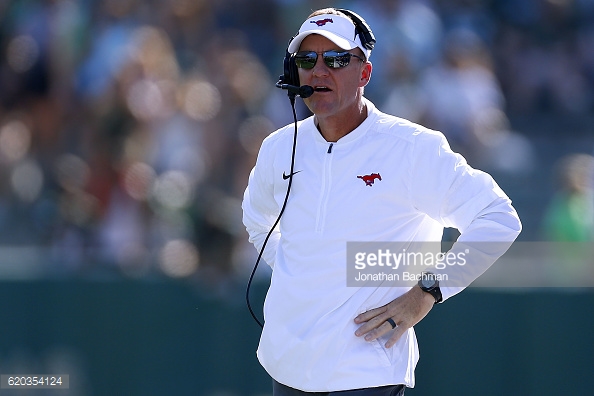 The Baylor football program is rapidly trying to close in on one of their targets to become the next head coach in Waco: Chad Morris, according to Football Scoop.

The SMU head coach has strong ties to the Lone Star State, coincidentally, he was a Texas high school head coach at Stephenville, which is where Art Briles used to coach, and where former Baylor QB Jarrett Stidham played (could be return??). Before his time at SMU, Morris was an outstanding offensive coordinator at Clemson from 2011-2014.

New Baylor AD Mack Rhoades has said he wants a coach who is an offensive innovator and has ties to Texas. Morris has both.

According to the report, Baylor also wants to speak to Houston head coach Tom Herman. Rhoades is the one who hired Herman at Houston before he left for a brief stint at Missouri.

SMU is expected to offer Morris an extension and a raise after the season ends. But, will that be enough?

Morris addressed the rumors during his press conference today, saying he had not been contacted by Baylor (but, let’s be honest, doesn’t mean someone close to him hasn’t).

Watch #SMU HC Chad Morris discuss the rumors about him and Baylor ? pic.twitter.com/uBo4Zu7LQA

The Mustangs close out the regular season on Saturday against Navy. Meantime, Baylor plays Texas Tech Friday in Dallas, followed by the final regular season game of the season next Saturday at West Virginia.