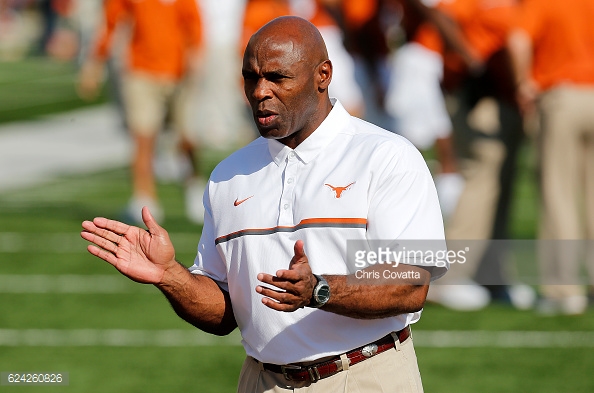 Oh, so Texas hasn’t made up its mind? Wow, shocker.

According to Chip Brown of Horns Digest, Charlie Strong might be able to save his job with a win over TCU on Friday.

There were several reports on Sunday that Strong was essentially fired. Texas then denied that report and since then the whole thing has been in limbo.

Brown notes this is similar to 2013 when Mack Brown could have saved his job with a win over Baylor in the final game of the season. The game was tied at 3 at halftime, but Baylor pulled away for a 30-10 win.

Donors told Brown it’s not just about the wins and losses, but about how they’ve come about, saying, “A lot of times, it hasn’t been just the loss, it’s been the way we’ve lost. It’s been embarrassing. Totally embarrassing. Any fan base can appreciate well-coached, hard-fought losses. But that’s not what it’s been under Strong. It’s been collapses in which the team looks poorly coached.”

Regardless, there are other issues, such as money, that come into play here. Strong’s buyout is for more than $10 million, and his assistants have a buyout of over $6 million combined. That’s not chump change, even if you have the Longhorn Network cash flowing your university.

There appears to be a group of people around Texas football who believe Strong deserves to come back in 2017 because he has a lot of talent on his roster, but it’s just young. The same guys who want Strong out and want to go after Tom Herman are the same ones (dopes) who thought they had a shot at Nick Saban three years ago.

Without knowing the inner workings of who wants Charlie Strong to stay and who wants him to go, if the ones that want him out are just rich blowhards, I hope the people that are actually in charge tell these guys to shove it. It’s amazing how being rich suddenly gives you a ton of knowledge on how to be a football coach. Very fascinating (sarcasm should be detected).

So, I know what I’ll be doing Friday afternoon: cheering like hell for the Texas Longhorns. Charlie Strong deserves 2017. No doubt about it. Want to know why? Listen to my podcast from earlier this week.